What a wonderful gift was the life of Sister Mary Leo during these past eighty-nine years. 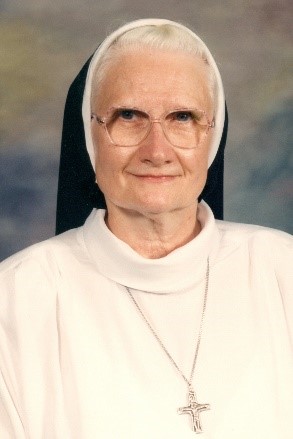 Kathleen was the first-born of six children born into the family of Catherine and Leo Furlong in Bellevue, Ohio. Her childhood years prepared her for a lifetime of looking out for others in her dual careers of teaching and nursing. She, with her brothers and sisters, attended Immaculate Conception School, Bellevue, Ohio and there became acquainted with the Sisters of Notre Dame. After graduating from the eighth grade, Kathleen entered the Aspirant School and attended Notre Dame Academy in Toledo. She entered the Congregation in 1945 receiving the name of Sister Mary Leonilde which was later changed to Sister Mary Leo. In 1951 her sister Carol entered the congregation becoming Sister Mary Beatrice Ann and in 1952 another sister, Eleanor, followed the path to Notre Dame becoming Sister Mary Joan Frances, later changed to Sister Mary Joan.

Sister Mary Leo was a gifted teacher of young children from 1947-1960 serving in schools of the Toledo Diocese. Then in 1960 Sister began studies for her nursing degree at St. Mary School of Nursing in Rochester, Minnesota. Shortly after becoming a registered nurse in 1963, she became Charge Nurse for the Sisters of Notre Dame in the Toledo Province and served in that capacity from 1964-1991 when she suffered a stroke. Sister Mary Leo was a woman ahead of her times, introducing practices in our community health care system that aimed to keep Sisters healthy and whole, and prevent potential health problems. Sister Mary Leo was highly respected by medical personnel being able to diagnose what might be the cause of a health problem. Health Care Professionals listened readily when she offered an opinion. She spoke with quiet gentleness and reflective insight and her wisdom was sought and trusted. One knew that Sister Mary Leo wanted only the best for anyone under her care. The sisters placed great confidence in Sister Leo during their times of illness and aging.

Sister’s love of others manifested itself as she grew in her love of God reflected in her attraction to the charismatic prayer movement. She prayed through her love of music even as she entered upon her last days. Sister took up her residence at the Rosary Care Center in 2011 where she continued to greatly influence the other residences through her prayer and words of wisdom. Her sharp mind held clear memories of students, family members, employees and sisters so that she could recall happenings and tell stories that others had long forgotten. She will be deeply missed by family, sisters, and friends. May she rest in the Lord’s healing embrace and gain fullness of life.