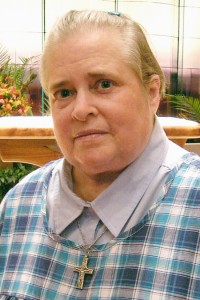 Loretta was the only daughter of Joseph and Helen (Evanko) Gedeon. Together with her older brother, Richard, she enjoyed a happy childhood with family gatherings, a variety of interests and many friends. Loretta always enjoyed learning and excelled at her studies. At Wickliffe High School she selected courses that would help her secure good employment to earn money for a college education to attain her goal of becoming a teacher. She felt a great sense of accomplishment through her participation in choir and dramatics. Her love for music and song was life long.

After graduation in 1964, Loretta worked for three years before enrolling as a full-time student at Cleveland State University. As a college freshman, she was accepted into the Cooperative Education Program that enabled her to do full-time substituting and tutoring in schools. She soon discovered she was a born teacher! A supervising teacher wrote: “Loretta is blessed with a rare combination of being intelligent, and enthusiastic, and possessing the ability to relate to all ages. She excelled in all she did.”

As a small child, Loretta thought of entering religious life, but because of family obligatons was not able to fulfill that dream until 1972 when she joined the Sisters of Notre Dame. At investment, she received the name Sister Marie Labouré, later returning to her baptismal name, Loretta. As a postulant, she continued her ministry in the field of education teaching children in primary grades and children with special needs for twenty-five years. Sister Mary Loretta was an outstanding teacher with a loving and responsive heart. She was especially filled with empathy and appreciation for the innocence of small children. The gifts she received were the gifts that she gave.

When it became necessary to retire from teaching, Sister Mary Loretta ministered to her sisters in community—supporting, encouraging and praying for their needs. For many years, Sister was a loving caregiver to her parents. She worked tirelessly, even as her own health declined, for their well-being and comfort until the time of their deaths. In her own personal sufferings, Sister was uncomplaining and grateful to all who ministered to her. She relied on Mary,  under the title of Our Lady of the Miraculous Medal, as her source of strength and consolation. In her life journey of saying “yes” to what lay before her, Sister Mary Loretta trusted that God’s goodness and provident care would sustain her. May she now rejoice, and rest, in eternal peace.