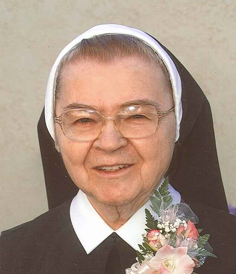 After receiving a Master of Arts Degree in Economics from Catholic University of America in Washington, D.C. as well as a second Masters in Library Science from Western Reserve University in Cleveland, Sister Mary Lynn taught high school in the Cleveland and Elyria areas. In 1960, Sister came to California where she continued her ministry in secondary education.

Sister served first as an instructor and later Director at Pilarica College in Thousand Oaks. From 1965 to 1970 and again from 1975 to 1984 she was assigned to St. Matthias High School in Huntington Park as both a teacher of economics and librarian as well as moderator of the Library Club. In 1984, Sister Mary Lynn joined the provincial house community at Notre Dame Center in Thousand Oaks.

During her years at the Center Sister Mary Lynn became involved in what would become her “passion” – Detention Ministry. Sister made pastoral visits to a number of prisons and/or jails in the area where she became friends with many of the inmates for whom she prayed daily. Several times a year, Sister would compile a newsletter to “my guys in jail” which she laboriously pecked out on a manual typewriter. Although sisters offered to type it for her on a computer, Sister always declined, saying the project was “her labor of love.”

As an extension of her detention ministry, Sister Mary Lynn also became involved in “Get on the Bus”, a program which provides free transportation for children to visit their incarcerated parents for Mother’s or Father’s Day. Each year Sister would add a big straw hat decorated with ribbons to her habit and appeal to the parishioners of St. Paschal Baylon Church as they came out of Sunday Mass for support for the program. Over the years, Sister’s annual appearance made it possible for enumerable children to celebrate their “Day” with their mother or father.

About five years ago, Sister Mary Lynn’s health began to decline, but it was not until the fall of 2012 that she moved into the skilled nursing wing of the Health Care Center, although she continued to participate in community prayers and meals. When she was no longer able to come to the chapel, Sister continued to attend the daily Mass and to enjoy various religious presentations on EWTN.

Within recent weeks, it had become apparent that Sister Mary Lynn was peacefully entering the final phase of life. On the afternoon of Tuesday, May 27, Sister quietly answered the invitation of her God whom she had faithfully served for the past sixty-five years – “Come, you who are blessed by my Father. Inherit the kingdom prepared for you from the beginning of the world…For I was in prison and you visited me…Whatever you did for the least of my brothers and sisters you did for me.”