Fill me with life anew, that I may love the things you love, and do what you would do. 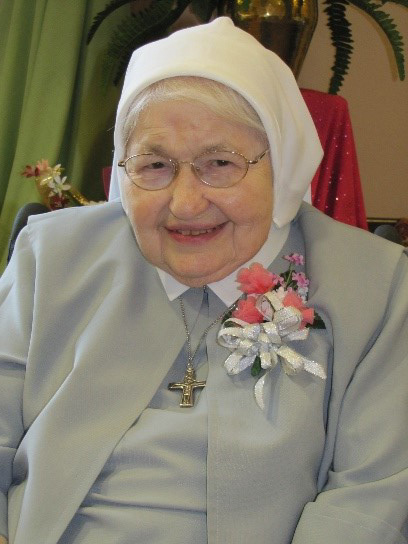 On the eve of the Feast of St. Joseph Sister Mary Magdaleva completed the final lap of her earthly journey at the Ursuline Center where she had been a patient for the past seven years.

Dolores was born into the family of Aloysius and Mary Windau Camp as the second eldest of ten children. After graduation from the eighth grade at St. Joseph School in Monroeville, Ohio, she entered the SND Aspirant School and attended Notre Dame Academy in Toledo, Ohio. In 1938 Dolores entered the community of the Sisters of Notre Dame in Toledo where she was invested as Sister Mary Magdaleva seven months later. Five years later her younger sister Ethel followed in her footsteps becoming Sister Ethel Mary.

Sister Mary Magdaleva spent herself in the service of the Church in the field of education as a dedicated teacher, principal, and tutor for fifty-three years (1941-1994). Then she began tutoring the special needs students at Mary Immaculate School and assisting as nursing aide in the Health Care Center of the SND Provincial Center for the next 10 years. In 2010 she became a resident at the Ursuline Center. Throughout the years of semi and active retirement, Sister Mary Magdaleva, very adept in crocheting and needlework, created lovely items for friends, needy persons, and parish festivals.

Throughout her entire life Sister was remembered for her prayerful spirit and intense presence. She spoke words of wisdom to fellow sisters, relatives, students, and lay acquaintances thus bonding long-lasting relationships over many years. Her prophetic words and endearing smile captured anyone who visited or cared for her especially in her declining years and all received a promise of prayers.

God worked through our dear Sister Mary Magdaleva for these 96 years as she carried the spirit of Hilligonde Wolbring to the Diocese of Toledo. She welcomed people of all ages, all religions, all walks of life into her care and compassion. She loved them unconditionally and challenged them to live in the light of Jesus. She looked at them tenderly and then she smiled upon them.

May God smile upon our Sister Mary Magdaleva as she enters into His eternal embrace.