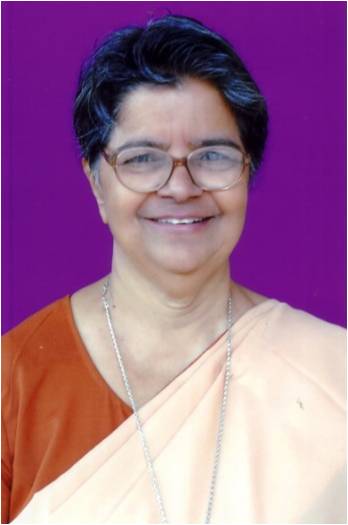 “The Spirit of the Lord is upon me
because He has anointed me to bring glad tidings to the poor.”

This text from the Gospel of St. Luke summarizes the life and ministry of Sister Mary Mala.  She possessed a faith-filled vision of her call to religious life, and her further call to involve herself in the charismatic movement.  In whatever ministry was assigned to her, she discovered many opportunities to help others to pray and to trust in God’s goodness and provident care. She was blessed with the gift of healing, and many children and adults had been helped through Sister Mala’s intercessory prayer for them.

‘Rose’ was the eldest of six children of Ulahannan Thannickal and Anna Paul in Monippally, Palai, Kerala. Sister Mary Mala had the joy of visiting with her aged parents in Monippally a couple of weeks before her death. Sister loved her family members dearly, and kept in contact with them.

Soon after her graduation from High School, Rose expressed her desire to join a religious congregation. Rose was accepted as a candidate and arrived in Jamalpur in 1960.  At her investment Rose took the name Sister Mary Mala, expressing her love and devotion to Mary, Queen of the Holy Rosary.

Right from the beginning, Sister Mary Mala was a gifted educator and a daring soul with compassion and love for the people.  After the completion of her college studies, she taught in NDA, Jamalpur, Munger, Patna, Pantnagar U.P., and was a vibrant headmistress of the Primary Sections of Notre Dame Academy, Patna, St.Joseph’s School, Mysore and Sophia High School, Bangalore. In whatever ministry was assigned to her she found ways to inculcate in the students moral values and guided them to turn to God in prayer. Sister also served in Holy Family Hospital as a volunteer for counselling and conducted prayer sessions for student nurses. People found much encouragement and strength from her counsellig sessions and prayer.

Twenty-five years ago, Sister Mary Mala heard a deeper call to leave behind the familiar shore and launch out into the Charismatic movement. Sister has travelled to different parts of India to help conduct charismatic retreats and healing sessions. The last charismatic retreat Sister Mala was involved in was in Gumla. Even though Sister Mala was semi-retired, in her great zeal, she took up a heavy schedule of teaching catechism in the primary as well as High School classes. Outside of class room teaching, Sister also spent time counselling children and adults, and praying with them. In Gumla, Sister also showed great zeal in teaching the postulants Scripture and guiding them in prayer.

Being unwell, she was rushed to Apollo hospital in Ranchi, where she fell unconscious and was in the I.C.U. for two days. She recovered and recognized the sisters who visited her, only to fall back again.  Sister passed away quietly at around 11:30 p.m.  Sister Mala will be remembered as a Spirit-filled person, a healer, and above all as a teacher who guided the children and adults to love God and to be open to God’s healing power. The Sisters of Notre Dame and the well wishers mourn the demise of Sister Mary Mala S.N.D. May her soul rest in peace.