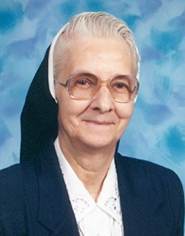 “Let the little children come to me.
Never hinder them, for the Kingdom of Heaven belongs to those who are like children.”
(Luke 16:19)

Rita Jean was the youngest of eleven children born to Joseph and Beatrice (Schoen) Schmitt in Sandusky, Ohio. In her young years, the family moved to Toledo where Rita attended Blessed Sacrament School and Notre Dame Academy. Rita began her formal training as a Sister of Notre Dame in January 1943. Later that year she was invested in the habit of the Sisters of Notre Dame and received the name Sister Mary Michel.

With degrees in Education and Special Education from Mary Manse College and St. Louis University, Sister was a highly effective educator for 62 years as principal, teacher, and tutor of several schools in the Toledo Diocese. In 1960, with Sister Mary Cyrilla, Sister Mary Michel began offering religious education classes to children with special needs. This led to the founding of Mary Immaculate School for Exceptional Children by the Sisters of Notre Dame of the Toledo Province. Sister Mary Michel organized the school and set up the curriculum for the first 15 students ages 6 to 16. Sister served as principal for 11 years and returned again as a primary and intermediate teacher. Sister encouraged many students to feel comfortable and positive about their abilities and to do their personal best.

As a vivid community member Sister Mary Michel contributed her musical talent as well as her sense of humor and adventure to community events. Sporting events, parties, and evening card games gave her a platform to manifest her playfulness and witty personality. Sister’s family was very dear to her heart. She cherished all her encounters with them.

On April 12, Sister Mary Michel, in her 73rd year of profession and as a resident at the Ursuline Center in Toledo, gave back to God her life of 93 years.

We are thankful for Sister Mary Michel’s presence among us, for her fidelity and dedication to ministry and her love for Notre Dame. The Lord has heard the sound of her calling, he has shown her the way. May he now bring her to her dwelling place with him forever.