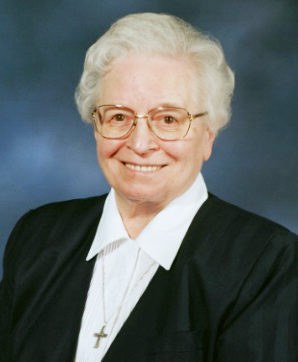 As she grew up in Cleveland and attended St. Benedict Church and School, Eleanore’s Slovak heritage was fostered and celebrated. She inherited the love and appreciation for family and the Catholic faith that were so much a part of her parents’ lives. Her brother was ordained a Maryknoll priest and her sister became care giver to her parents in their later years.

Eleanore enjoyed her school years, her friends and the good times of parish activities. The simple question of her eighth grade teacher, “Don’t you want to become a Sister?” encouraged Eleanore to seek a four-year partial scholarship to Notre Dame Academy, Cleveland, and enter the Sisters of Notre Dame in February of her senior year. At investment she was given the name Sister Mary Neil.

As a second year novice, Sister began her studies to become an elementary school teacher. However, in 1945 she was missioned to attend St. Alexis Hospital School of Nursing, Cleveland, where she graduated as a registered nurse in 1948. Because of the great need for teachers, Sister was asked to continue teaching for two more years. In 1950 she was assigned her first nursing duties at St. Mary Hospital in Humboldt, Tennessee, and then at the Provincial House and Infirmary in Cleveland. Sister Mary Neil was called to Rome in 1955 to be the private nurse of Mother Mary Vera. She traveled extensively and became proficient in several languages. In her free time she worked with students at the North American College and taught elementary pupils.

After the death of Mother Mary Vera in 1962, Sister Mary Neil returned to the United States and continued her education studies at Notre Dame College, Ohio, where she received a bachelor’s degree and then a master’s degree from John Carroll University, Ohio. For the next twenty-one years, Sister taught in high schools in Ohio, North Carolina and Florida. Students characterized her as a remarkable woman, teacher, leader and mentor. Her genuine and quick smile, her wit and wisdom exuded a sense of well-being and welcome.The love of Jesus Christ shone in her and through her.

In 1986, Sister Mary Neil was called back to the Generalate where she ministered as nurse, local superior and secretary at the Society for the Propagation of the Faith. When she returned to the Chardon provincial center in 1999, Sister assisted in the facilities office, the library, at switchboard, in the India Mission Office and with pastoral care. She loved life, was gracious and vivacious! Whether in Rome or in Ohio, praying her rosary for others or ministering to the sick, teaching or listening, walking or just enjoying life, Sister Mary Neil witnessed always and in all ways to God’s goodness and provident care. We are grateful for her example of deep faith and trust, her commitment and fidelity. May she now enjoy the eternal union with her Beloved that she so longed for during life.