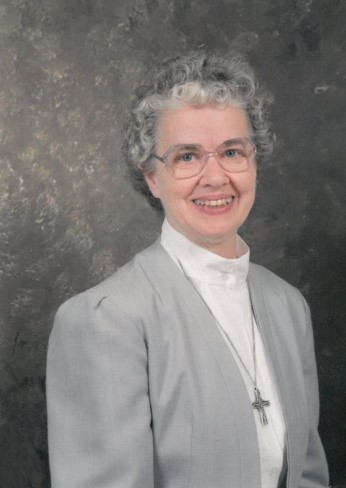 Sister Mary Paulla Hanneken was the fifth child of Harry and Alma Hanneken, and baptized Alma Ann at St. John Church about three weeks after her birth. She had two older brothers, Art and Paul, both deceased, and two older sisters, Rose Mary and Helen Margaret, the future Sr. Mary Paul Ann.

Alma Ann attended St. John School and Notre Dame Academy with her cousins from the close community of St. John parish. She realized her call to religious life when she was about 16, but she chose to enter the convent after she graduated from high school because, as she wrote, “I wanted to go to the senior prom to make sure which road I wanted to travel.”

Alma Ann had Sisters of Notre Dame in her own family who inspired her in the early years of her religious life: her sister, Sr. Mary Paul Ann; her Fritz cousins: Sr. Mary Kathelyn, Sr. Mary Ann Adele, Sr. Mary Stephanie; and from the Cleves family, Sr. Mary Virginia Ann and, later, her classmate Sr. Mary Jeanne Frances.

After attending Villa Madonna College (now Thomas More University), Sister Mary Paulla taught in the kindergarten once located in the provincial house and in primary grades in several local schools. In 1966, she started the Guardian Angel School, run by the Diocesan Catholic Children’s Home (DCCH). The program, for children who struggled academically and behaviorally, aimed to help so that they could transition into a regular academic setting. Sister Mary Paulla also served as the principal and director of both St. Aloysius Orphanage in Cincinnati, Ohio, and DCCH. Another administrative role was as principal of All Saints School, Montgomery, Ohio. Here she initiated the use of computers long before they were ordinary learning tools. One of the experienced lay teachers at All Saints named Sister Mary Paulla her best principal ever.

Next, Sister Mary Paulla ministered for eight years in community relations at St. Claire Regional Medical Center (now St. Claire HealthCare) in Morehead, Kentucky. There she brought a special joyful presence to the office. In her final ministry, she returned to her greatest passion, working with children and their families as assistant director of Julie Learning Center and, later, tutoring children at Holy Trinity School in Harlan, Kentucky.

In 2006, increasing signs of dementia brought Sister to the health care unit at St. Joseph Heights. About six years later she had a stroke, which deprived her of speech. Through it all, she was an inspiration to her sisters and the many health personnel who cared for her. Sister Mary Paulla will be remembered for her captivating smile, her love of community, and her passion for helping children. May the love with which Sister Mary Paulla served her God give her eternal happiness with him forever!