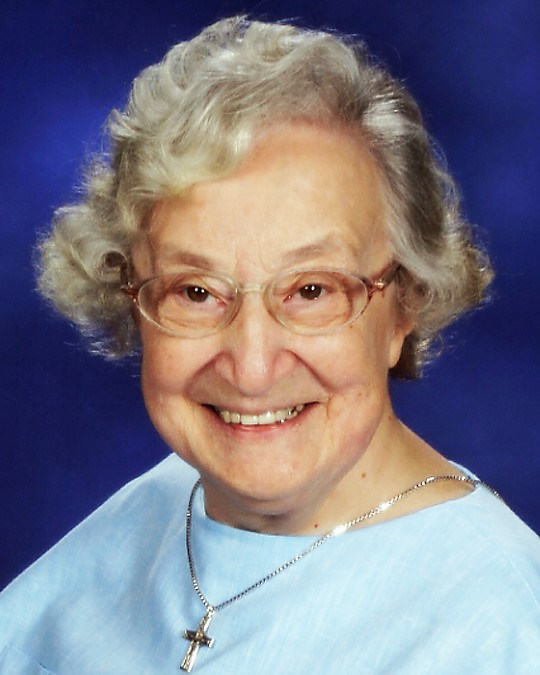 From 2005 to 2008, Sister Mary Randal wrote her Memoirs. Her life story recounts her family life, community life and ministries that literally spanned the globe. She saw herself as a pilgrim who learned to travel freely, meeting God in places, people and events. She observed, “As I went from America to Asia, to Europe and to Africa, it was with trust and confidence to let go of one place to find God in the next. I have never been disappointed.”

Theresa Anna was one of eight children born to Frank and Anna Catherine (Schumacher) Sup. One sister, Anna, died in infancy. With her five brothers and her sister, she learned to play and pray, to share and to care, to adapt and to love life as she met it each day. From first grade through high school Theresa was educated by the Sisters of Notre Dame. In her senior year she became an aspirant at Notre Dame Academy, Cleveland, and entered as a postulant on February 2, 1943. At investment Theresa received the name Sister Mary Randal with St. Raphael as her patron.

Sister Mary Randal taught primary grades at ten different elementary schools, while at the same time studying to earn a bachelor’s degree in education! In 1958, she volunteered for and was chosen to serve in the province mission in India. From 1960 to 1981, Sister saw her life in India as part of “God’s mysterious design.” The intense activity and demands of missionary life made her ever more aware of her need for God’s guidance. She cherished opportunities for spiritual renewal, times of closeness to God in the beauty of nature and in Eastern spirituality with its emphasis on contemplation. Sister ministered as director of the Primary School, director of junior professed sisters, teacher of candidates, provincial secretary and conductor of retreats. Always wanting to be busy with the Lord’s work, she would go wherever she was needed, working in many different ministries, especially with the poorest and most vulnerable people. “We passed on what we had inherited…a spirit of prayer, a community-mindfulness of joyful simplicity and zeal for the educational, medical and social ministries that we had undertaken.”

In 1981 Sister Mary Randal was asked to travel to Rome to assist with secretarial duties at the Generalate. She helped in the library and archives and delighted in escorting visitors to the holy places in Rome. For eight years Sister was on the library staff of the Pontifical North American College and acted as bookkeeper for Villa Maria Regina Guest House. In 1991 an unexpected request came: would Sister go to Nigeria to assist in the Nunciature of the Holy See in Nigeria, Africa? Sister spent a year in Africa as an administrative officer. There she observed the needs of the people and the country as a possible congregational mission site.

When she returned to Chardon in 2004, Sister Mary Randal helped in community and researched material for her life story. She was gifted with a joyful spirit and deep faith and trust. Her fidelity to God’s call and dedication to ministry were the stillpoints of her life. The very recent diagnosis of leukemia and her swift decline surprised everyone except Sister herself, who was ready for the final pilgrim steps on her journey. May she be welcomed into new life and know Easter joy!