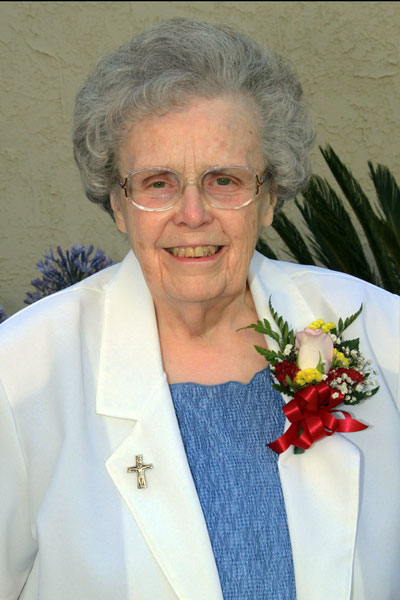 Behold, I come to do your will.

The death of Sister Mary Rose Anthony closes a significant chapter in the history of Rosa Mystica Province.  The 1947 Chapter Declarations gave permission to open a postulancy in California.  Consequently, the entrance of Margaret Mary “Peggy” Ballard on October 7, 1948 was an important event for the sisters stationed on the west coast.  Moreover, each subsequent milestone in Sister Mary Rose Anthony’s religious life was also an historic “first” for Rosa Mystica:  the first investment, the first profession of temporary vows and the first profession of final vows.  Reflecting on these early years, Sister wrote: “Everything the sisters and I did was new…  It was experimental through and through.”

Margaret Mary Ballard was the only child of Gordon and Dorothy Ballard.  Peggy attended grades one through six in Des Moines.  In 1941, however, the Ballards moved to Los Angeles, California, and enrolled their daughter in the seventh grade at St. Francis of Assisi School, taught by the Sisters of Notre Dame.  Following her graduation from St. Agnes High School in 1948, Peggy decided to fulfill her dream of becoming a sister.  She had worked with the Sisters of Notre Dame at St. Francis of Assisi and, as she later explained: “I found them simple, charitable and truly devoted to each other.”

From the onset of her religious life, Sister Mary Rose Anthony was especially interested in working with young children.  Beginning in 1952, she served as teacher and/or principal in both Northern and Southern California.  In 1990, Sister became Director of Religious Education at St. Rose of Lima Parish in Simi Valley, a ministry for which she was well qualified and one she particularly cherished.

A young woman who first met Sister in the mid 1980s when she was preparing to become a catechist remembered: “Sister Mary Rose Anthony was a spiritual, intelligent, up-to-date guide through our Faith and the recent changes that had taken place in the Church.  She had an amazing understanding of the children to whom we would be ministering.”

Among Sister Mary Rose Anthony’s special memories were both the National Congress of the Apostolate in Chardon and the 150th celebration of the Congregation’s founding in Coesfeld.  Both occasions gave Sister the chance not only to appreciate the “roots” of the sisters missioned to California from Ohio but also to experience the internationality of the Congregation as well as to learn more about the homeland of Sisters Maria Aloysia and Ignatia.

In 2002 Sister Mary Rose Anthony retired to Notre Dame Center, Thousand Oaks, where she continued to serve not only as sacristan and receptionist but also by her prayer and presence. Her devotion to community life and her commitment to adoration before the Blessed Sacrament were also parts of her generous service.

Sister Mary Rose Anthony’s health had been failing for the past years, especially since the death of her dear friend, Sister Mary Clara Roling in 2012.  However, Sister was an enthusiastic participant of the celebration of her 65th Jubilee of Profession in 2016, once again the “first” sister formed in the California novitiate to do so.