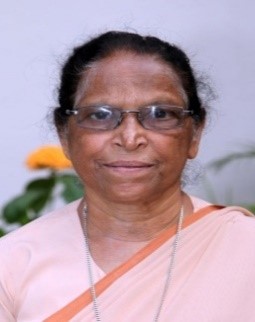 Rosa was the 6th of 7 children born to Mathai and Mariam Ezhaparampil and was baptized on 14th July at their Parish Church. In her autobiography written at the age of 18, Rosa especially mentions her younger sister after whose birth she didn’t like to go to school, as she wanted to look at the little one all the time. That little sister is Sr. Elsa SCN who also modeled her life after her two elder sisters who had entered religious life. In her own words, Rosa was a free and caring child, well-loved and appreciated by her family and school.

In school Rosa joined several Pious Associations, and became the leader of the mission league, Sodality, KCSL, social service league, which inspired her and spurred her to serve the poor and needy even at that tender age. No wonder she chose the most difficult mission field, the state of Bihar! Her desire to serve the Lord in the poor was so strong, that to her mother who was reluctant to send her so far away Rosa said, “perhaps this will be the best way to become a saint!”

Her life in the missions began when she joined the Sisters of Notre Dame at the age of 18 in 1963 and was professed in 1967 symbolically taking a new name, Sister Mary Sarika. Her faithfulness to her call was manifested in her steadfast obedience and uncompromising devotion to any ministry she was assigned to, always keeping the ‘poor’ in the core of all she did both in North and South India. She was a pioneer, an educator, a treasurer, a local superior, a school manager… In all these, Sister Mary Sarika displayed a remarkably enduring courage which helped her to rise above hard times. She found ways to bloom where ever she was planted. She won the hearts of her family, her sisters, her friends, the people she served – poor and rich alike – by her child-like simplicity and availability. To us Notre Dames, Sister Mary Sarika was a prayerful, generous, daring, caring, forgiving, hardworking, unassuming and a very friendly person. She could turn a house into a home, a school office into a welcome space of comfort, a village into a family! Sister Mary Sarika enjoyed fairly good health all her life till an unfortunate fall on August 9th 2017. Though she recovered from it amazingly fast, a viral fever with an infection of the lung led to cardiac arrest in early September. She was treated at St. John’s Medical College Hospital till 5th of November, when she breathed her last.

Sister Mary Sarika faithfully served our good God in his people for 50 fulfilling years. She has touched the lives of thousands! Though she and we waited with excitement to celebrate her golden jubilee, her bridegroom Himself called her for the celebration in the heavenly kingdom. May her soul enjoy eternal peace!