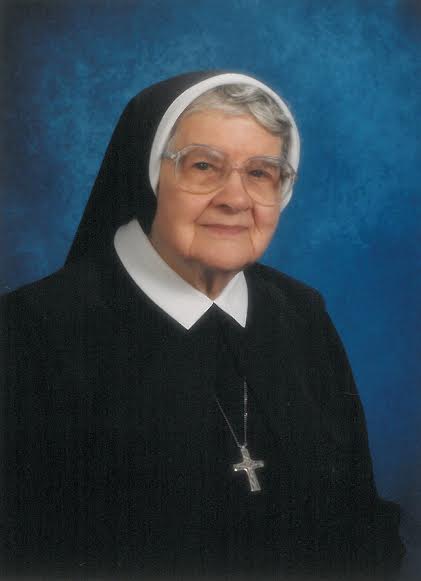 Florence Felix was born on January 15, 1915, in Cincinnati, Ohio. Her father, Harry, worked at Procter & Gamble; her mother, Anabel Kincaid, was a housewife. After Florence’s Baptism, her mother became a Catholic. During World War I, the entire family contracted the Spanish flu. Anabel was sent to the hospital where she died of double pneumonia and Spanish flu. Before the mother’s death, two Sisters of the Poor of St. Francis helped Anabel to consecrate her family to the Blessed Mother.

Florence was the middle child of three boys and two girls. Since her father was unable to raise the children, they were placed in St. Aloysius Orphanage, Cincinnati, where Florence attended elementary school. From there she entered Notre Dame Academy in Covington, Kentucky and became an aspirant of Notre Dame. After graduation from high school, she joined the Sisters of Notre Dame and made her profession of vows on August 13, 1935.

Having been consecrated to Mary when she was small, Sister Mary Sheila developed a great devotion to Mary and entrusted her vocation to the Blessed Mother. Each day she prayed the Memorare before Mary’s statue and was always grateful to Mary for her religious vocation.

Sister Mary Sheila held a Master’s Degree in English, and a minor in Latin and French. Most of her long life was spent working in education. She taught music, loved to sing, and sometimes served as organist for church services. During many of these years she taught in elementary schools in Ohio and Kentucky. She also taught at Notre Dame Academy for a total of nineteen years.

Her last place of ministry was St. Columban School, Loveland, Ohio, where she spent fifteen years. During her years at St. Columban, she tutored in the classroom, did several of the daily chores, and joined the Primetimers organization for retired persons – attending their meetings and going on short trips with the group. Sister studied and composed poetry. Her poems were collected into two books entitled Desert in Bloom. (Two volumes.) She was a member of the parish choir. As a tribute to Sister Mary Sheila, this choir participated in the liturgy of her funeral Mass.

Eventually, Sister became a resident in Lourdes Hall. She was often seen in the chapel and was a source of prayer for various intentions. As she stated, her prayer was “mostly a passionate love of God and Mary in action.” One of her favorite pastimes was singing, as a soloist or with others.

Sister Mary Sheila celebrated her 100th birthday on January 15, 2015. She was looking forward to her Jubilee of Peace this summer, marking 80 years of religious profession. However, as the time approached, Sister grew noticeably weaker. On the feast of the Annunciation, her heavenly mother Mary called her to heaven. May Sister Mary Sheila know the joy of being in God’s presence and being re-united with her dear earthly mother and other family members, as well as singing with all the angels and saints. May Jesus and Mary continue to be her joy forever.