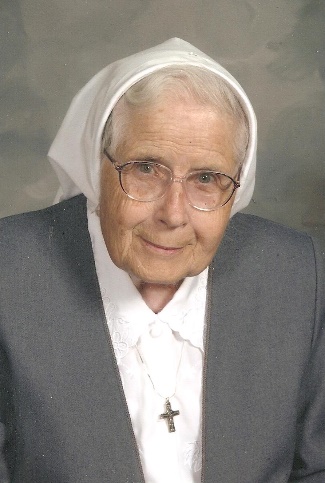 The joyous outgoing nature of Sister Mary Virginia was a gift to all who knew her. She is remembered for her gentleness with a bold spirit. This same spirit inflamed a relationship with Jesus that left Sister unafraid to lay expectations on her Beloved. Sister Mary Virginia knew when to push and when to stand back and wait, when to relinquish and when to embrace new ways of living in committed discipleship.

One of seven children born to John and Mary Streicher Wenninger, Frances learned from an early age to be loving and giving, generous and compassionate in her dealings with others. She grew up in Toledo and attended St. Mary School and then proceeded to Notre Dame Academy where she graduated. Inspired with a deep longing to serve God through serving others, Frances entered the Sisters of Notre Dame in July of 1936 and was invested in August of 1937 as Sister Mary Virginita.

Sister Mary Virginia taught children in grades one through four in various schools in the Toledo Diocese beginning as early as 1939. After 32 years of teaching in the Toledo Diocese she joyfully accepted the obedience to educate the youth in Papua New Guinea. It had been her long desired dream to be a missionary and at last her dream was fulfilled in 1972. For eighteen years she moved among, celebrated with, and taught the children and adults in the mission. Her dedication to her work was evident in the joy she expressed whenever the topic was mentioned. Stories and pictures of the mission resulted in colorful, exciting and lengthy conversations about her many years with the people on the Island.

In 1999, Sister Mary Virginia returned to the United States and was engaged in various activities in parish life until 2010 when she became a member of the Provincial Center community at the age of 92. On March 26, 2015 Sister Mary Virginia moved to the Ursuline Center because of health reasons and it was there she met her bridegroom in her 76th year of religious profession at the age of 97. May her joy be full in the presence of her Divine Savior.