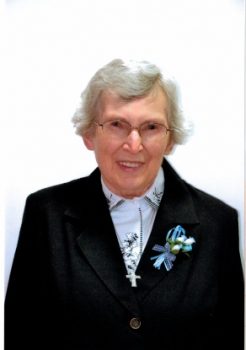 In a family of 10 children, the parents Aloysio Klein and his wife Maria Cecilia Spohr Klein educated them in the Catholic faith, in such a way that three daughters became Sisters of Notre Dame. Sister Ottilia Maria Klein has two sisters in the Province: Sister M. Hedwig Klein and Sister M. Lucia Klein. Their brothers formed Christian families, according to the example drawn by their parents and lived in their family.

She graduated in Social Studies from the University of Passo Fundo, RS. She had Proficiency in Portuguese and Social Studies and also studied Theology at Pius the XI Institute, in São Paulo, SP. “Those who teach to many the path of virtue, shall be like stars forever”. (Dan. 12:3) These words of the prophet Daniel are very meaningful to the life of Sister Ottilia Maria who taught in the Notre Dame Schools during 43 years. She captivated many of her students, as many of us, today sisters, for the accuracy and the nobility of her classes.

Of her life, 63 years were spent as a Notre Dame religious. And 43 of them, she served the Kingdom of God in the mission of the Congregation of the Sisters of Notre Dame as a teacher, catechist, and librarian. In recent years she devoted herself to visiting the sick and recording the annals, which were written with promptness and righteousness.

No Geography class was given without physical and political map of the region and/or Country. In her Religion classes, the dogmatic and linguistic details were explained according to the Catechism. In the Portuguese classes she required good reading, recitation of poems identifying them with their rightful owners. For many years, she also taught music. She was a demanding and a kind teacher, fulfilling in her ministry the congregational charism, being simultaneously good and firm.

May the Heart of Jesus, which she loved very deeply, keep her in His mercy, in His love, in full life. May Mary, the Mother of Jesus, reward her for everything, especially for the catechesis and religious education classes, given with so much zeal. We believe that Sister Ottilia Maria will intercede for us before God, particularly for more priests and religious vocations.