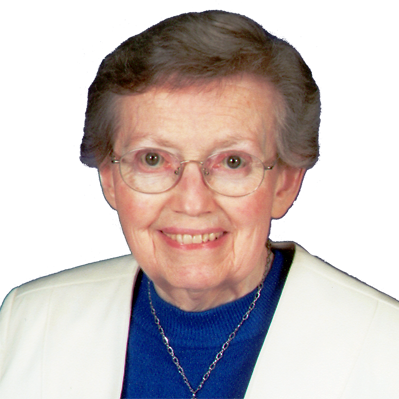 Bernadette described her family as a precious gift from a loving, provident God. Her father Michael had a selfless love and her mother Helen (nee, Healey) possessed the ability to nurture religious and intellectual formation. Our Blessed Mother was an integral part of family life. They were members of Immaculate Conception Parish, Toledo, Ohio. Bernadette and her older sister, Mary Lourdes, first met the Sisters of Notre Dame at Notre Dame Academy in Toledo, and after graduation, both chose to attend Notre Dame College of Ohio.

Initially, Bernadette wanted to be a research physicist, but the College did not offer physics. She earned her bachelor’s degree in mathematics and was certified in German and physical science. As a college sophomore, Bernadette realized her call to religious life and entered the Sisters of Notre Dame on February 2, 1946. At investment she received the name Sister (Mary)Teresemarie with St. Therese, Doctor of the Church, as her patron.

After teaching high school students for fourteen years, Sister Teresemarie returned to her beloved Notre Dame College where she ministered for the next thirty-nine years, advancing to the status of professor of mathematics. Sister was a pioneer in bringing computer technology to the College and served as mathematics consultant in the computer services division of NASA Lewis Research Center, Cleveland. In 1999, she designed the first distance learning course on the internet entitled, “Newton’s Human Approach to Truth.”

Sister Teresemarie’s greatest love was research in the field of philosophy and the study of John Henry Newman. Her interest in Newman began with what she feels was his answer to prayer during her father’s illness. She began reading Newman’s works, wrote articles and papers for publication and spoke on the “Grammar of Ascent.” After moving to the Provincial Center in 2003, Sister continued with research and writing. Although unpublished, her manuscript,The Newman Revolution, is the fruit of her labor. She remarked that her hobby in retirement was “Newman!”

As her health declined, Sister Teresemarie remained a woman of refinement, graciousness and gratitude. Whether enjoying baseball, engaged in conversation or participating in faith sharing, Sister’s mind continued to delve into the mystery of life and of truth. She wrote, “To reach into the mystery beyond words, Heart must speak to Heart. May we be open to the Heart of God when he speaks, that his will may be accomplished in the hearts of all his children.”

May she rest in his Heart and know truth for all eternity.