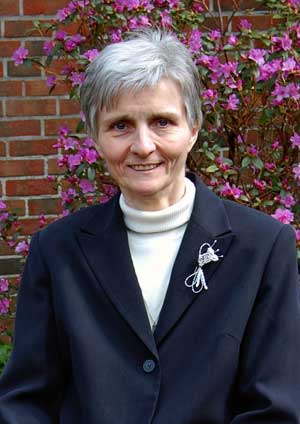 Sister Maria Gabriele has trusted in this promise of God, and during the years of her serious illness, these consoling words have given her strength and confidence.

Sister Maria Gabriele, Gabriele Hackstedt, was born in Barßel, County of Cloppenburg. She was the daughter of Bernhard Hackstedt and Maria Hackstedt, born Blömer. On the second day after her birth, Gabriele had an emergency baptism because her condition was life-threatening. She spent her childhood and youth with her two brothers and her sister on their parental farm. In 1980, she graduated from high school. After studying social education, she entered our congregation in Vechta on October 10, 1985.

In 1992, she received a diploma in pedagogy in Vechta, teaching at the technical college in Marienhain at the same time. She taught there for several years, competently passing on her diverse knowledge. As warden of our children’s home she used her humane and professional abilities with great idealism. Her four-year stay with our sisters in Kettering, England, was a very special time for her. Here, too, she combined teaching and studying.

Within the congregation, Sr. Maria Gabriele has also been very committed by cooperating in the juniorate, as second provincial councilor, and as local councilor at the then provincial center Marienhain. Again and again sister was appreciated as a conversation partner who knew how to communicate with people in an open, understanding way, seeing the good in each person.

Since 2006, a congenital defect necessitated several high-risk and life-threatening surgeries which had challenging and long lasting side effects and sapped her strength.

On Saturday, April 14, 2013, she was able to celebrate her silver jubilee with her co-sisters and on April 26, 2013, her parents and all her family were invited to a celebration. It was a good day which all those who were present like to recount.

During these last months her health has been failing more and more and several times she had to spend some days in the hospital.

On February 6, 2014, she had again been taken to the hospital and her strength was failing so rapidly that all her family gathered to say their farewell to Sister Maria Gabriele.

We believe that on the morning of February 7, 2014, the Lord took Sister Maria Gabriel by the hand and led her home into his eternal Kingdom.