A day of encounter in the convent of Mülhausen 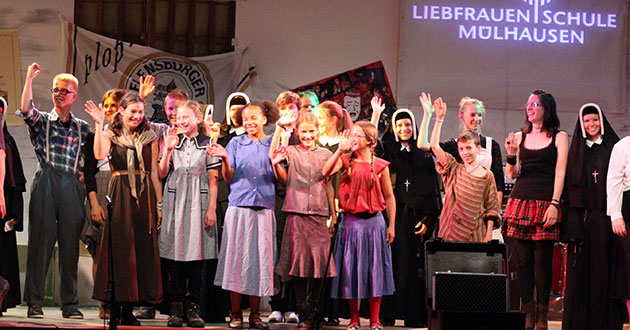 The 7 September 2013 was to become a “Day of Encounter“. But who could have anticipated that this encounter in our province would become such an impressive encounter with the history of our congregation?

This year, the convent and the school in Mülhausen celebrate their 125th anniversary with various activities and meetings. One of the highlights was the musical “Against the stream”, which the Liebfrauenschule Mülhausen had invited the sisters of our congregation to watch. Regarding the means of modern theatre, we were curious to see how a school community would nowadays get involved in musically and especiallyspiritually interpreting the topic of the history of a congregation.

For almost a whole year, Mr. Lange, a former teacher at the Liebfrauenschule, had studied historical sources and visited the important sites of our history in Coesfeld. What we got to see and to hear was a masterly performance of Lothar Lange, who was the scriptwriter, the director, the scene-painter and an actor at the same time. Equally excellent were his many collaborators among the students and teachers. The contribution of the genial music teacher Jakob Stauber was especially outstanding. He was in charge of composing and rehearsing fitting musical inserts with the LFS Big Band, the other instrumentalists, solo singers and dancing groups.

For more than two hours, we were witnessing the history of our congregation live, we became collaborators, were touched and deeply moved by the profound relationship of our sisters with God and by their courageous standing up for their faith. The keywords “Deus providebit“ and “Against the stream“ occurred like a red thread throughout the performance. Of course, like in every good play, there were also scenes which entertained us by their comic and originality. All in all, we were amazed and touched by the serious tune of this interpretation of the 165-year-old history of our congregation and by the importance that Mülhausen has in it. 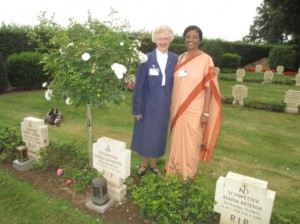 With “standing ovation“, we joined in the finale of the LFS school hymn, thus showing our appreciation and our enthusiasm to all those who had participated on, near, or behind the stage. We thanked them for this unique present they offered our congregation on the occasion of the anniversary.

We also thank our cosisters in the convent of Mülhausen. As it suits their traditional hospitality, they have offered us a wonderful feastday. We were happy to meet two former superior generals, who happened to be in Germany, and many sisters who had come from the Netherlands, thus expressing their appreciaton of the convent of Mülhausen. We also thanked St. Peter for blessing us – despite the weather forecast – with a bright and sunny day, which let the park and the house in Mülhausen appear in all their splendor.

Above all, we thank God for carrying and leading our congregation until today in good and in difficult times. Deus providebit!