A festive month of December, Tegelen, The Netherlands 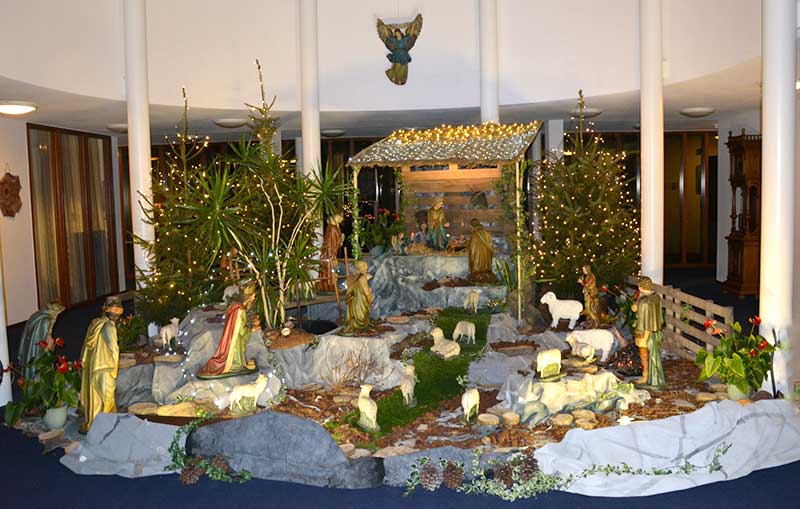 What a festive and impressive month of December we, the Sisters in the Netherlands, experienced.

It started on December 6, 2013. The traditional feast day of St. Nicholas was a really cozy, homey party in a richly dressed room with a real Saint Nicholas, although without a beard. This was in protest against an effort to remove Black Peter, a figure that originated in the Saint Nicholas tradition of our country and became really popular. Sister Maria Katarina represented Peter in a very endearing manner, dancing and, carrying a banner that said: “The most integrated Black Peter in the Netherlands”

Several days before, in the morning, each sister found a surprise chocolate letter on her door with a large Santa Claus biscuit. This was very tasty and good for the waistline. Unwrapping the gifts brought by St. Nicholas was a celebration in itself, and of course there was no shortage of the famous apple dumplings. Each sister then took her presents to her own room.

On December 8, the feast day of Mary Immaculate, we enjoyed the true festive mood with several beautiful celebrations. In our hall in front of the refectory, the congratulatory messages from the various provinces and delegations were on display. This brought to our mind the fact that we are part of a worldwide Congregation.

Each weekend one more of the four Advent candles was lit on our huge Advent wreath that had been prepared by Sister Maria Katharina, who is a real artist. The atmosphere was prayerful with a flute concert or a children’s choir on Sunday afternoons. 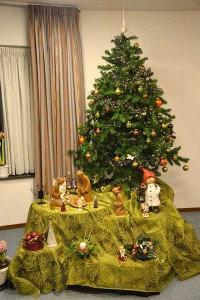 In the hall a large and impressive Christmas display unfolded. Visitors stood admiring it, and many children would have liked to pick one of the sheep or stand by the little bridge. Each sister placed decorations in her own room, and so the entire convent was characterized by an enchanting Christmas atmosphere. During the week before Christmas, there was a festive Christmas lunch with all the people in our house. With 90 people we sang Christmas carols, accompanied by a choir of senior citizens. What an enjoyable time we had!

And then on Christmas Eve, Father Bronneberg, who had come from Rome, said the midnight Mass in our chapel which was full. We sang with all our heart and wanted to have the little King in his manger very close to us. After Mass, everyone was warmly welcomed to a reception in the decorated recreation room.

On Christmas Day, we had a Christmas celebration with songs and poems. Each sister contributed to the true Christmas spirit.

On December 31, we gave thanks to God in a special Evening Prayer service for all the good that we have received from Him during the past year. After a festive supper, we wished each other a good ending of the year and could begin the year 2014 trusting in God.

1
SHARES
Share on FacebookShare on Twitter
A day of encounter in the convent of Mülhausen
Teacher Training Program in Patna, India