Connecting through the Years 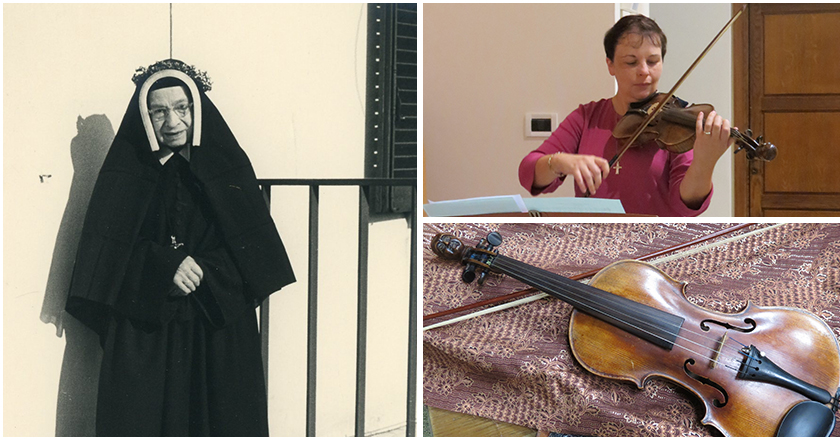 Sister Angela Marie Salazar from the Chardon Province is one of the young religious participating in the Vatican event in Rome. While at the Motherhouse the participants have been sharing some of their respective cultures through songs during the liturgy.

Angela, being the only participant from the U.S. was thinking of ways she could contribute. She is an accomplished violinist, having studied the violin in college and now serving as a music therapist. A violin was found in the choir loft and shared with Angela. The violin is marked “Friedrich Bangerius, Master Violinist. Budapest, Hungary 1785”. Inside the case was this note, “This violin belongs to the Motherhouse. It was used by Sr. Maria Bonaventura.” Angela together with Sister Elizabeth Wood, the archivist from Chardon who was still in Rome helping in the archives, looked up more on Mother Maria Bonaventura (Antonie Feldmann) ND 1036 and found Mother Mary Vera’s 45 page obituary of Mother Bonaventura. They noted the following, “Antonchen (Little Antonie) inherited a very precious violin which had been in the family for over 200 years. She acquired considerable skill in playing the violin.”

As one reads her life, it becomes very clear that Mother Maria Bonaventura gave her all to God and to the Congregation. She played the strings that compose her life as she did the strings on her violin, with skill, grace, and love. Her story plays on in the lives of the next generation of Sister of Notre Dame.