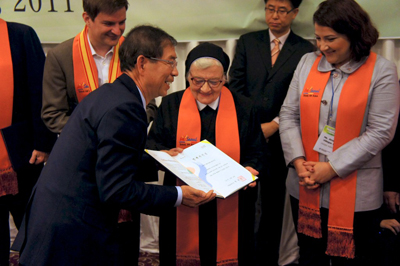 Sister Maria Bertilde, SND, is one of 16 foreigners living in Korea who have been especially committed to the Korean people. For their commitment, they were awarded the honorary citizenship of the city of Seoul on Friday, October 28, 2011, by the mayor of Seoul, Park Won-soon. Among those honored, Sister Maria Bertilde was the only woman, the only German and the only religious. 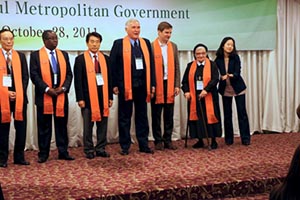 This ceremony was the first official act of the mayor who had just been elected the day before. All media were present and transmitted the ceremony to millions of people in manifold ways.

The 16 chosen citizens who come from 12 different countries of origin, were first given an orange sash and then accompanied to the stage. In a short portrait a speaker introduced each person and his or her special field of dedication.

Sister Maria Bertilde was sent to Korea in 1967 by the Congregation of the Sisters of Notre Dame and has been dedicated to proclaiming God’s goodness and provident care to the people of Korea since then. Her commitment to people with physical or mental challenges was the major reason for her nomination for her honorary citizenship. With this, the city of Seoul wishes to officially recognize the untiring efforts of Sister Maria Bertilde which already began when she was studying the language and at the same time working for the “bus girls“ who were struggling for their rights until the Olympics in 1988. 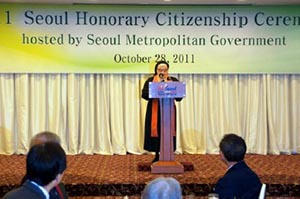 In 1972, Sister Maria Bertilde started a kindergarten in Busan, especially for children from families in need, so that the working mothers could be relieved of some of their burden. The positive spirit which was part of the foundation at that time is alive to this day in the kindergartens and day care centers which were started in later years.
When the city of Seoul asked the Sisters of Notre Dame to take over a training center for physically and mentally challenged people before the Paralympics, Sister Maria Bertilde also had a part in the negotiations that led to the decision.

Her tireless efforts, her modesty, her great success, and her popularity all led to her being awarded the honorary citizenship.

The mayor presented each of the new honorary citizens with a two-page certificate, and another representative of the city honored each one with a special medal. 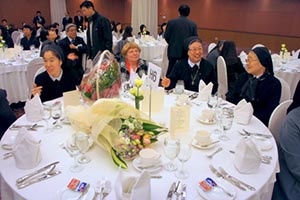 Sister Maria Bertilde was one of a few of the new honorary citizens who spoke Korean and she was the one who had been living in Korea for the longest time, almost 45 years. She was asked by the others to say a word of thanks in the name of the whole group. In addition to the gratitude for the honor, she also expressed their readiness to dedicate themselves to the further development of the country as well as the appreciation of the rich Korean culture. She herself promised that she would do this above all in her prayer. The words of gratitude spoken by Sister Maria Bertilde in Korean were received with much applause by the mayor and the big audience gathered for the celebration. Among the guests were Sister Maria Bertilde’s sister and some friends who had come from Germany for the occasion, the German Ambassador, a representative of the German parish in Seoul, and a group of our Korean sisters, including Sister Marie Aquina, the provincial superior.

After the ceremony there was a festive meal for all those honored and their guests. Following the dinner a Korean orchestra offered traditional Korean Music and singing. 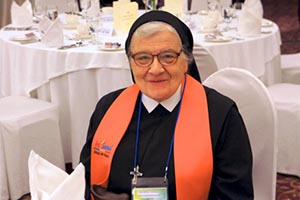 To conclude the day, all were taken on a bus tour of Seoul. Along the way they stopped to visit some special sights. We congratulate Sister Maria Bertilde on the honor she received and rejoice with our Korean sisters at the great woman in their midst!