On September 25, 2015, Sister Raimara and Sister Deisi Maria Naibo went to Palmas, Tocantins, to hold the “II AcampJUND” with the youth of Palmas, Paraíso do Tocantins, and Santa Rosa do Tocantins, communities in which the Sisters of Notre Dame work and live.

The meeting happened on September 27, on the farm of the Community “Seeds of the Word”. In total 53 people participated: Young people from 13 to 26 years and Sister advisors from each community. It was a day of much reflection, living together, sharing, prayer and animation. The topic discussed was based on the meetings during the whole year: “Where are you going?” The young people were invited to reflect on their choices, and realize that they determine the present and the future of their lives, so that it is important to notice which direction they are following and where they want to arrive. Because of this the vocational dimension and the youth realities were discussed with them. The young people participated in a cultural program and in a integration rally. The meeting was concluded by sending the groups out as lights to enlighten all with whom they come into contact: family, friends, colleagues at school, etc.

October 3 was the day when the groups of JUND in the South region had their II AcampJUND. The young people who participated were from the towns of Taquara, São Sepé, Júlio de Castilhos, Santa Maria, the cities of Canoas, São Lourenço, and Riqueza, SC. The meeting was held at the Notre Dame Centre of Events, at Nova Santa Rita, RS. Around 120 people participated in this event: young people, advisors, musicians and guests.

The day was marked by moments of reflection about themes on spirituality, affection, friendship, vocation, leadership and youth reality. The groups also had moments of recreation and integration. The day began at 5.30 am and concluded with Mass at 5.30 pm, presided by Father Domingos Rodrigues from Bagé, who came especially to participate with us. We thank the good God for the success of the II AcampJUND and are already looking forward to the next meeting in 2016. 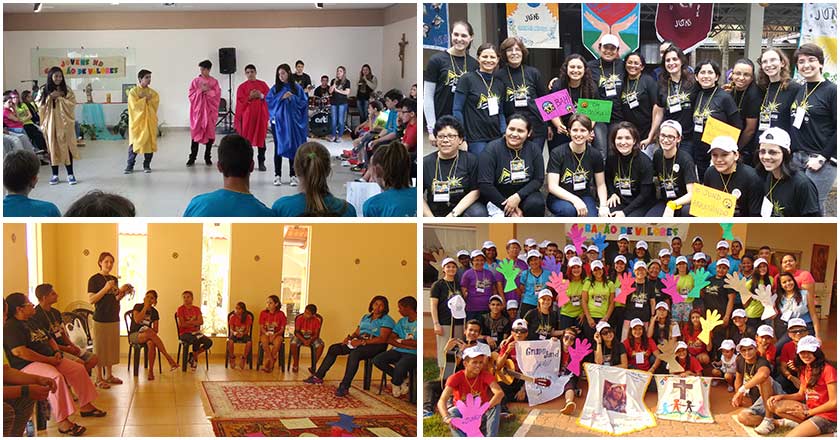