Pilgrimage to the place where the goodness of God was manifested! 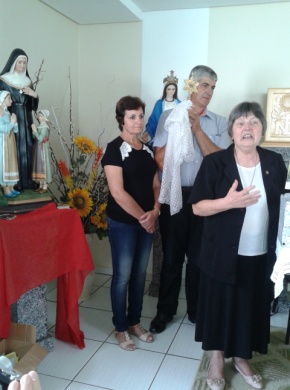 In the past there were beautiful fields in new lands, today, there is a “new field of manifestation of the Good God.” This was the experience of the pilgrims who were there in memory of the 200th anniversary of the death of St. Julie Billiart.

The story is that Mr. Otacílio Ribeiro sought relief in Campos Novos Hospital, where the Sisters of Notre Dame worked. Verifying the severity of his illness, the doctor ordered immediate surgery. When he opened the abdomen of his patient, he found an irreversible case: a tumor had taken over the entire abdomen. Medicine at his fingertips did not offer him ways to save the patient.

Then he handed him to the care of the nurse, Sister Maria Ludvine, SND, to assist the patient in his last hours and warn the family that he would only have a few hours of life. Sister M. Ludvine, great devotee of Mother Julie Billiart, was not satisfied with this situation.

She invited her co- sisters and the family of Mr. Otacílio to pray a novena to Blessed Mother Julie. Faith moved the hearts of all. Sr. M. Ludvine inspired confidence in the patient. On the third day, in the morning, when Sister came, Mr. Otacílio was sitting on his bed, with the holy picture of the Blessed Mother Julie, saying Sister, I’m healed. This little Saint healed me.

Sister M. Ludvine called the doctor, who confirmed the miracle: the tumor had disappeared. This fact has been recognized as a miracle by Pope Paul VI, who declared Julie Billiart a saint on June 22, 1969.

This story is not over. When the devotees of Saint Julie went on a pilgrimage to this place, they proved that it is “a place where the goodness of God is manifested” today. The hospital room where the miracle happened was transformed into a chapel in honor of St. Julie Billiart.

The pilgrims spent long hours of prayer in this sacred space. All returned grateful, saying with more conviction: “Oh! How good is the good God! “