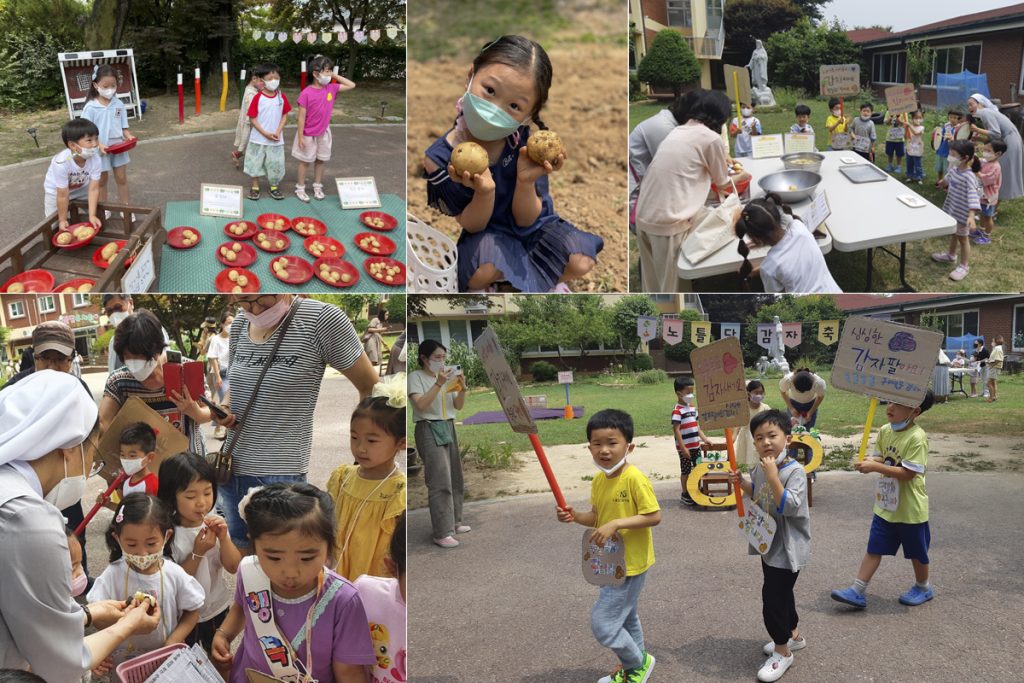 Children of Osan Kindergarten planted seed potatoes themselves in March, took care of them, and finally harvested them in June. They went on to open a potato market to sell the potatoes they produced, mostly to their parents as their customers. With a bell, a signal for its opening, parents entered the marketplace following the guide/publicity team who were the Mascots of the potato market.

At the market, the children performed well in their roles as the local delivery team carrying potatoes in a cart, a sales team offering their raw crops in red basins, another sales team selling steamed potatoes in a traditional type of large pot and roasted ones on a metal drum, the team in charge of the stall where people tasted the cooked potatoes, the team to offer the experience of peeling raw potatoes with a spoon, the team of the stall for creating acronym with the word ‘Gamja – the Korean word meaning potato,’ the photo zone team taking a picture of visitors with a cute potato character dress on them, or the guide/publicity team energizing the whole market by singing and playing musical instruments.

For the price of potatoes, parents donated in a box, which was sent to children suffering from the war in Ukraine, those in Myanmar in political unrest, and a climate activist group.

The children felt happy and fulfilled by growing, harvesting, and selling potatoes and helping those in need with the money from the sales. It is also said that even the children who do not like potatoes enjoyed them better when they heard that those potatoes were their own yields. Osan Kindergarten will continue to plant several other crops, raise them, and harvest them.