Province of Regina Pacis invited Franz Kett, the RPP founder for a seminar 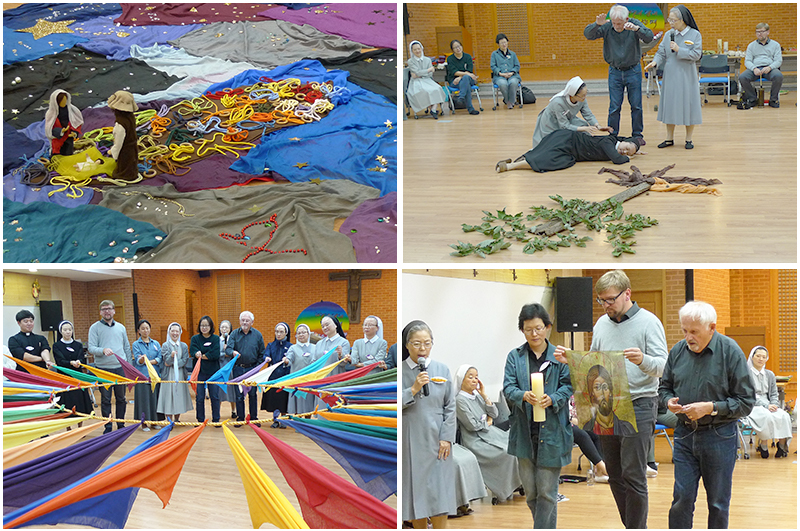 October 2017, Incheon Province Religious Pedagogical Practice Institute held a RPP seminar by the founder in the Peace and Unity Center in Paju. From 14 to 17, Franz Kett, RPP founder with Fr. Cyril, the vice president of Association of World RPP showed the core of RPP. Totally 93 religious of different congregations, catechetical teachers, students, kindergarten teachers and priests participated in the program.

Sisters of Notre Dame in Korea has focused on religious education for children since it was launched by German Province in 1967. Thereafter we delivered the catechetical methodology to the Korean Church even more actively by employing RPP which had been introduced by a German sister Hermengildis in 1993 and the RPP Education Center officially started in 1997, marking 20th anniversary this year.

Sisters of Notre Dame in Korea had translated this special methodology into RPP (Religionspädagogische Praxis), but Association of World Leaders in Germany named it Kett Pedagogy.

The Kett Pedagogy refers to a holistic methodology of leading learners to understanding the instruction while they express the inner images creatively directly with natural and sensual materials such as cloths, beads, branches, stone, soil etc. Its primary philosophy is the statement, “I exist.” This awakens the consciousness that I exist to thank for the life given to me into this world and all those freely given which sustain my life.

The second philosophy is to awaken that I exist in relations. It helps us renew relations by enlightening our relationships with the world, nature and our Creator God through various methods.

The third is that I exist to form and direct life. For this, learners are invited to make a picture with objects on the floor, which can also be a practice of forming their own lives.

With this philosophical foundation as its object, this method can be said, most of all, to help everyone in the world “experience that life is a joy.”

Korean Sisters of Notre Dame RPP Institute are actively giving courses for women religious working in parishes and teachers, special workshop requested by dioceses or parishes and retreat programs. Furthermore, many education programs and retreats through Kett Method are offered in China, Japan, Vietnam and the Philippines.