Sisters of Notre Dame participate in “Nun Run” in Texas 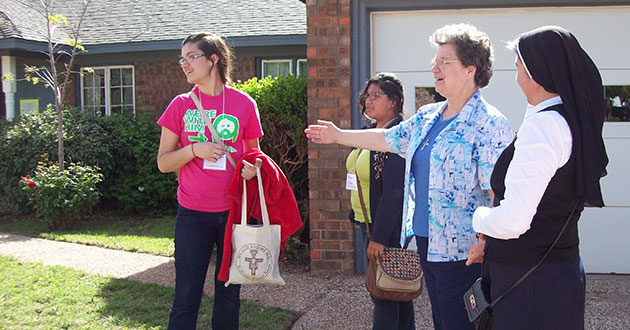 The Sisters of Notre Dame, the newest community of the Lubbock Diocese in Slaton, Texas, hosted girls interested in religious life on Saturday, April 11. The diocesan-sponsored activity advertised as the “Nun Run,” aimed at introducing young women to religious life, brought the participants to the convent at about 3:30 p.m. in a small bus provided by the Vocation Office.

After the group, which included Sister Olivia Rico, FMC, diocesan Director of Vocations, prayed evening prayer and toured the convent, Sister Mary Loretta Pastva explained the origin, charism, spirituality, and work of the Sisters of Notre Dame. By way of an icon painting of Sister Maria Aloysia, Sister Loretta showed the group the original habit of the community. Using the painting by a sister of the Toledo province of the foundress’s catechizing a child, Sister Mary Brenda Haynes of the Toledo province told the story of Hilligonde Wolbring’s initial impulse to take in poor children. Sister Patricia Marie Keefe, also of the Toledo province, added to the instructions by explaining the symbolism of the cross and ring worn by every sister. Before climbing back into the bus, the group enjoyed a hearty supper of stuffed baked potato, salad, homemade cupcakes and cookies and beverages on the enclosed porch of the convent. All were donated by the Fiat Committee and prepared by the sisters at Slaton. 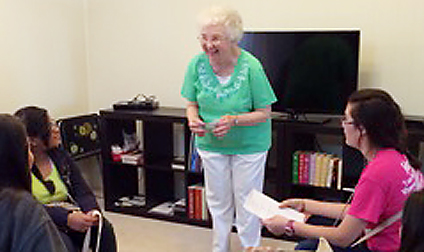 The stop at the Slaton convent was the last of four convent tours for the group, which included houses of the Franciscan Missionary Sisters at the houses of St. Francis in Lubbock and St. Alice in Plainview; and of the Missionary Catechists of the Sacred Hearts of Jesus and Mary at Our Lady of Grace Church.

The Fiat Committee of three lay women and six sisters, including Sister Loretta, is chaired by Sister Olivia. They planned and executed the project, supplying breakfast and lunch and bringing the food for the evening meal to the Slaton house on Friday and serving it at the end of the Slaton tour. This committee sponsors other vocation-encouraging activities including a three-day Fiat Camp held annually in August at a campground in Blanco Canyon in Floydada, Texas. Sister Loretta was active at that event last year. All these activities are sponsored by the Diocese of Lubbock with the backing of the Serra Club of Lubbock and the Knights of Columbus.

33
SHARES
Share on FacebookShare on Twitter
What did the Pilgrimage mean to me?
Pre-Postulancy Program in the Visitation Province Bangalore