We love, because He first loved us, Passo Fundo Province 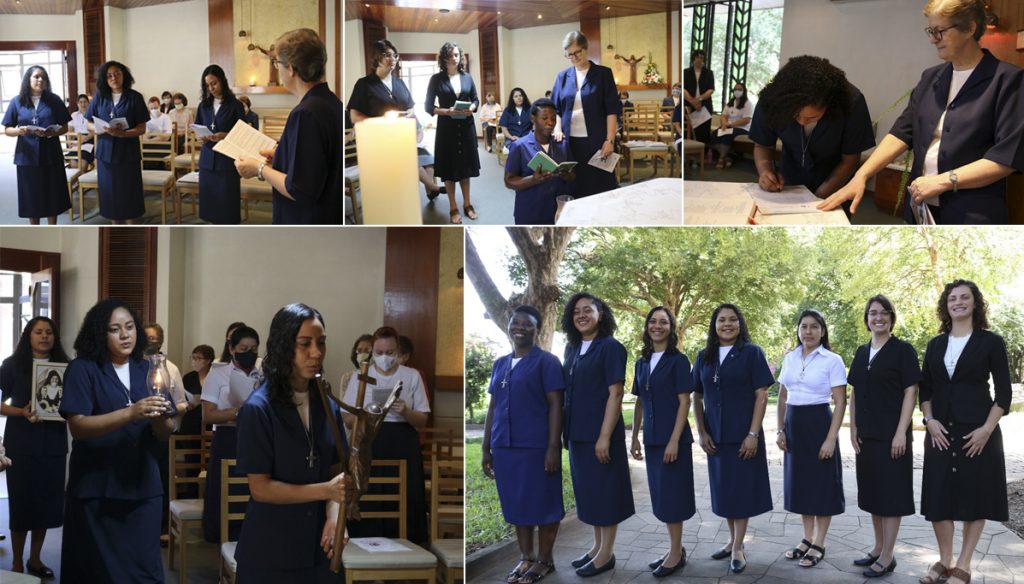 Sisters Maria Diana Fernandes Pinheiro, Natacha de Oliveira Silva, and Thais da Silva Barbosa professed their first vows in the Congregation of the Sisters of Notre Dame on the Feast of the Presentation of the Lord, February 2, in Casa Santa Cruz chapel in Passo Fundo. For this important event, the three Sisters chose the theme “We love because He first loved us” (1 John 4:19). The occasion was preceded by two months of intensive formation during which several Sisters presented different topics in order to help the three novices pave the way for their first commitment.

The sister´s religious profession was also preceded by an eight-day retreat, guided by Sr. M. Luiza Morschel, from the Canoas Province, which had as its theme: “Julie, the guardian of the goodness of God”.  This topic was especially meaningful since the sisters here were already preparing to celebrate the centenary of the arrival of the Sisters of Notre Dame in Brazil that will take place in 2023. The Junior Sisters also participated in this retreat and, during the Eucharistic Celebration, individually, renewed their vows. The professed sisters present renewed their vows together as well.

Because of the restrictions imposed by the pandemic and in light of the common good, only few people attended in person. Thus, the celebration was live streamed on Facebook. In addition, the group of sisters responsible for promoting vocations, made a short video of the event so that family members and friends would be able to enjoy it.

Earlier Sister Glória Elizabeth Maria Flores Jara, from the Province of Canoas, had made her first religious profession on January 24, a celebration at which the formators and novices of the Passo Fundo Province were present. Likewise, a group of Sisters from the Canoas Province joined the celebration held in Passo Fundo on February 2.

0
SHARES
Share on FacebookShare on Twitter
We sealed an everlasting covenant with the Lord, Passo Fundo
A Day to Remember!