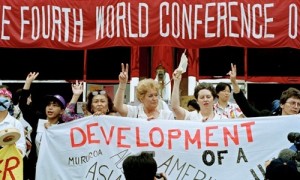 You may remember reference to the very significant women’s conference in Beijing in 1995. Three of our Sisters were present for this historic meeting which produced the Beijing Platform for Action. The BPfA has been a powerful agenda for women’s empowerment since 1995. It treats such areas as poverty, education, health, violence, armed conflict, power and decision-making, human rights, environment, media, advancement of women, and the girl child.  The Sisters who attended this international movement are: Sisters: Mary Sujita Kallupurakkathu, Mary Sudha Varghese, and Kathryn Feeley.  Regional gatherings intended to renew the political energy and social mobilization twenty years later focus on the following issues:

1. Overview and analysis of achievements and challenges since 1995
2. Progress in the implementation of the critical areas of concern of the Platform for Action with emphasis on the years since 2009
3. Data and statistics
4.  Emerging priorities

The outcomes of these regional review processes will feed into the 59th session of the Commission on The Status of Women in March 2015.

Planning for the Third International Day of the Girl

October 11 will mark the third UN International Day of the Girl. Some of our schools are already preparing. “To help galvanize worldwide enthusiasm for goals to better girls’ lives and providing an opportunity for them to show leadership and reach their full potential” is the aim of young women at Notre Dame Academy, Toledo, Ohio. The International Baccalaureate Diploma Programme is providing leadership to a project which will not only fulfill requirements for a culminating project for the IB Diploma, but it will “raise awareness of the hardships girls around the world face, solely based on their 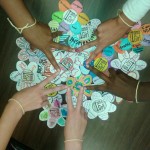 Two young women, with the support of their IB director, Ms. Angela Joseph, recognize that many girls living in poverty lack basic necessities, among them feminine materials and care. This situation results in girls’ inability to attend school on a regular basis.  Carra Gibson and Isabel Abu-Absi are planning a multi- media education segment for the Day of the Girl, in their words,  “ to spread awareness about these issues and not only inform NDA girls about the needs that are commonly present, but to engage them and finally, empower them to do some- thing about it”.  Carra and Isabel are in touch with Sr. Jeannette Pierre-Louis, SND de Namur. Sister works at Notre Dame Family Center in Les Cayes,Haiti,  to provide rudimentary education, health services, and job training skills to women and children. NDA will assist with funds for feminine care products and in the process get to know local culture and members of the local youth center, along with their volunteers.  http://beijing20.unwomen.org/en/in-focus/girl-child

Unaccompanied Minors: What is the reality that prompts migration?

Immigration advocates have become aware of increasing numbersof young persons traveling alone to the United States seeking asylum status for the past several years. However as dangers from gangs and drug cartels increase, parents fear for the lives of these children.  Another driver of the migration is family fragmentation due to large backlogs of applications in the immigration system and also increased deportations of workers who are unable to obtain visas to be legally present in the United  States. Numbers of minor children crossing the US/Mexico border from Guatemala, El Salvador, Honduras and Mexico have risen to 60,000 so far for the year 2014.  Many NGOs and Church groups are assisting these young persons with basic shelter and social needs as well as registering them for school. Being able to attend classes has been out of the question for children who had been afraid to leave their houses for fear of gangs, now more frequently linked with narco-traffickers.

Educating communities where the children are arriving is critical; many are re-joining parents whom they have not seen for years.  A great majority of the children are fleeing countries among the five most violent in the world, therefore grounds for asylum exist and the children’s cases require legal representation.

Each September, after summer holidays, the United Nations becomes a hub of activity again with the meetings surrounding the opening of the General Assembly which takes place on September 26. The new president of the Assembly comes from Uganda.  Sam Kahamba Kutesa is currently Uganda’s Minister for Foreign Affairs.  He has proposed as the theme of the 69th session: ‘Delivering on and Implementing a Transformative Post-2015 Development Agenda.’ He said this underscores the need to agree on the post-2015 agenda and also ensure its implementation. He emphasized the need “to address the means of implementation, in terms of financial resources, technology development, transfer and capacity- building,” including a strengthened global partnership.

Kutesa also expressed commitment to reaching a global agreement on climate change, and advancing gender equality and women’s empowerment.  Each year another region has the opportunity to choose a candidate for presiding over the General Assembly. Then the 193 member states draw lots to see which one which delegation will occupy the first seat. This year it will be Cuba.  Other states will follow in English alphabetical order.

General Assembly Committees, at which NGOs are present and active, begin on October 7.

A reminder about the link to our UN SNDs blog:www.sndatun.wordpress.com

To contact Sr. Mary Jo at the UN:  maryjotto@snd1.org