Since the beginning of May, everything was being prepared for the homecoming of the three Mozambique novices: Sisters Mariana Recai, Ester Marie 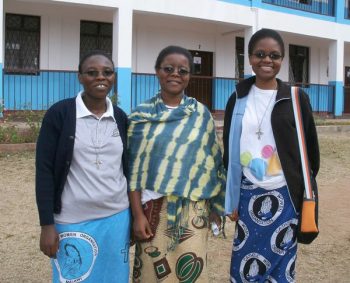 Moisés Eduardo, and Julieta Maria Orlando, returning from Tanzania after three years of formation. Their arrival on May 28 was a great joy!

On June 8, Eva Braz Tomo left for Uganda, where she will make her postulancy. Besides accompanying the candidate, Sister Maria Diva Jacoby, the temporary professed directress, attended a meeting for formators in Ngiro, Arusha, Tanzania. 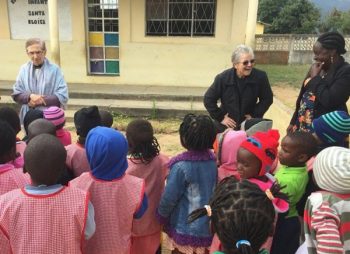 On June 16, Sisters Maria Helena Rovani and Maria Cleomar from Passo Fundo arrived to give their contribution for the mission in areas of their expertise.

On June 18, a group of Sisters went to Gorongosa, in the Diocese of Beira, to learn about conditions and needs where a new SND community will be established later this year. The Sisters were heartily welcomed by the diocesan priests and by the people who, with great anticipation, are waiting for Saint Julie´s daughters to live and minister among them.

On June 24, João Carlos Hatoa Nunes, the new bishop of the Diocese of Chimoio, interrupted his pastoral visit to preside over the temporary vow ceremony of the three novices mentioned above. It was a very expressive and lively celebration, animated with dances and songs, at which the Mozambican people excel.

On June 26, during a Mass concelebrated by three priests from Jécua, Sisters Turesse Marie, Finita Marie, and Maria Ema renewed their vows. A festive informal lunch followed. All the rooms in the house were in use by the participants since the number of sisters is increasing.

On July 2, we welcomed Sisters Mary Sreeja and Maria Nonata, members of the general council. For several days they visited the communities and activities of the mission. A highlight of the visit was Sister Mary Sreeja’s historical outline of the twenty-five years of SND presence in Mozambique, in which two groups, native and missionary sisters, reflected and shared about their hopes and dreams.

Also on this occasion, Sister M. Nonata spoke about the UNANIMA International.

Animated by a missionary spirit, the sisters in Mozambique continue in faith, joy, and hope to commit their being and doing to the good and provident God.