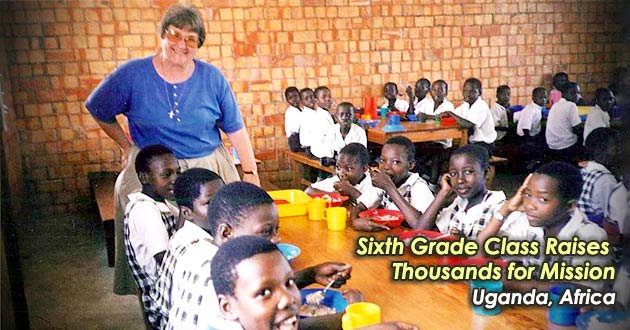 Since she returned from Uganda, Africa in 2005, Sister Jane Marie McHugh has motivated her students at Saint Dominic School in Eagle Rock, California, to raise thousands of dollars for the ongoing mission in Buseesa, Uganda.

Every year she explains to her class of sixth graders that, as citizens of the world, they are responsible for each other. She tells them stories about her time in Uganda and paints a picture for them of what life is like for the students there.

“They love it,” Sister Jane Marie said. “They love helping and they know that it’s their obligation as brothers and sisters in Christ to help those less fortunate than they are.”

The Kibaale District has no paved roads, and electricity is only available in some areas.

“Our goal is to train Catholic leaders for the Kibaale District,” said Sister Jane Marie. Some of the first students who attended Saint Julie School are now teachers there. Others have gone on to college, seminary, or have become Sisters of Notre Dame. Sister Jane Marie hopes that these individuals will help to uplift the district in the long run.

Last school year alone, Sister’s students raised over $800 for the mission. That money can be used for purchasing hoes for the garden where food is grown for the Saint Julie School, for textbooks, or for paying the matrons, cooks, teachers and workers on the property.

“Outside donors are where the money comes from,” said Sister Jane Marie.

In 1992 the Sisters of Notre Dame were invited by the Bishop of the Diocese of Hoima in Uganda to go to the Kibaale District to raise the standard of education and to train for Catholic leadership there. Sister Jane Marie was in the first group of four Sisters of Notre Dame to travel to Uganda. When she arrived in 1995, the convent buildings were unfinished and the school was still in the future planning stage. The sisters taught classes at the local government school for a year and a half before opening their own primary school.

“What we have been able to do there is quite a great accomplishment on the part of the sisters, our donors and collaborators,” Sister Jane Marie said.

The differences between the classrooms at Saint Julie School and Saint Dominic School are stark.

“Here I use a Smart Board, iPads and computers.  I need to integrate all of that in order to keep the students interested. In Buseesa it’s just me and a chalkboard and whatever I can make myself.” She shows her students at Saint Dominic School a photo of the children at Saint Julie School and sometimes sends a photo of her class to Uganda.

Sister divides the students into two teams, and incentivizes the project by rewarding the group that raises the most money. This year, Sister Jane Marie and her class are also organizing a school-wide service project for the mission.   This will take the form of a weekly bake sale and a jeans and accessories day.

Even though Sister Jane Marie is no longer stationed in Uganda, she has certainly not forgotten her beloved children of Buseesa.

11
SHARES
Share on FacebookShare on Twitter
A NEW VENTURE, A NEW MISSION in Odisha, India
Our Mission in Mozambique