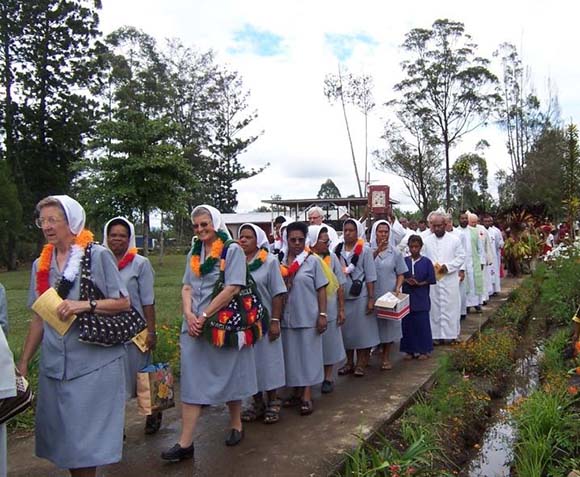 In 1961, four courageous Sisters of Notre Dame from the province of Mary Immaculate in Toledo, Ohio, USA, followed the invitation of the Bishop from Mt. Hagen to establish a mission in Papua New Guinea. They started out teaching boys, and then opened a boarding school for girls and a number of other schools. Today 13 national PNG sisters along with missionary sisters from Toledo are involved in programs to empower women, in supporting people impacted by AIDS and in promoting education and catechesis for all.

The following is an account of the jubilee celebrations offered by Sister Marietta Widman, the superior of the Holy Trinity Delegation in PNG:

“No single written account can do justice to summarize our celebration of SND’s 50 years presence in Papua New Guinea, especially in the Western Highlands Province, but the following is an attempt to capture the highlights. 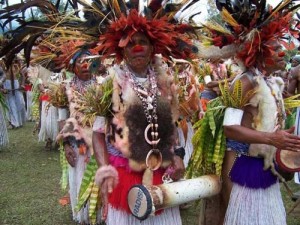 In May our SND jubilee committee decided to invite lay collaborators to help plan for our Golden Jubilee Celebration. We sisters had planned to celebrate on just one day: August 13th. However, our lay collaborators wanted us to do much more. They wished to use the time to say their thanks for all the sisters have done in the Western Highlands Province, and thus many planning meetings followed with our lay people taking the main leadership.
So, our one day celebration turned into many. The staff and students of our schools prepared dances, songs, poems, dramas and speeches as ways to show gratitude to the sisters for teaching in their schools and thus bringing many opportunities for those who were educated. Since there were so many days scheduled, we sisters took turns attending so that we could also keep up with our present ministries. At each place the children and adults made contributions of money and food (including pigs) for two big days of celebration planned for August 12 and 13 in Banz. 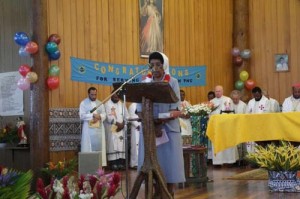 On August 12th the sisters were greeted at the Parish Church by many traditional dancing groups. The grounds outside the Church were filled with many groups from different areas, each dressed in their area’s traditional dress. They were singing and dancing simultaneously around the grassy area. While these groups were dancing and/or giving dramas, speeches, etc, another group was preparing a huge mumu (food prepared in a cooking pit) from some 20+ pigs, bananas, greens, kaukau, etc. to be shared with all who came. The food was spread out on individual large banana leaves and scaled according to the group to whom it would be given. It was then presented after all programs were over. 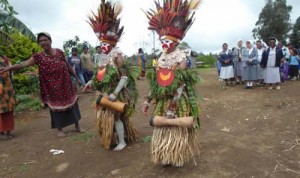 The climax of our celebration was the Holy Mass on August 13th. The Sisters were asked to assemble at the end of the airstrip where our first four missionaries arrived on August 15, 1961. From here we were led to the Church by Banz area dancers who were dressed traditionally. The Liturgy could not have been more inspiring and beautiful. Our Archbishop Douglas Young was the main celebrant along with Bishop Arnold Orowae from Wabag Diocese (and a cousin of our Sister Mary Gina), and many priests. The Mass was full of joy and beauty – with Jesus, our Bishops and priests, our people, our students and the joyful music and processions of dancers.

After the Liturgy, we had time to greet our guests who came to share our joy. This was followed by more programs of dances, songs, dramas and speeches, all of which were held outside. The day concluded with a meal at Maria Kwin Center.

Besides the gift of self and gratitude that the people gave, many contributed money to a special fund for the future of the SND’s in PNG, especially for formation of Sisters and for our ministries.
The group of people who had joined the planning committee desire to celebrate a Notre Dame Family Day each year in August, as well as possibly form an associate group of Notre Dame lay people.
We Sisters are overwhelmed by the Goodness of God shown through our people. They have shown us also that they desire to help us in promoting vocations so that the Notre Dame presence continues in PNG, especially in education. We pray that we may be found worthy to complete the task God has put before us in PNG.”

2
SHARES
Share on FacebookShare on Twitter
Praise to the Lord for the 40 years of Notre Dame presence in Acre
A New Call to Mission Among the Masai People of Simanjiro, Tanzania