Teaching in the Highlands of Papua New Guinea 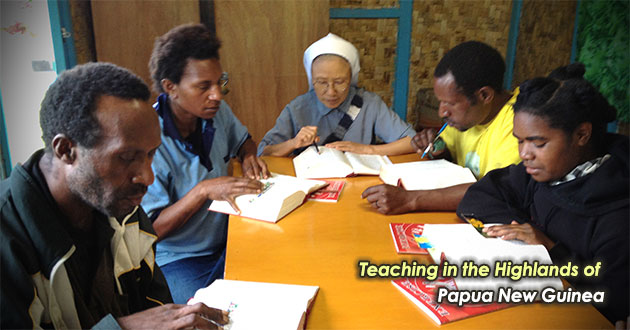 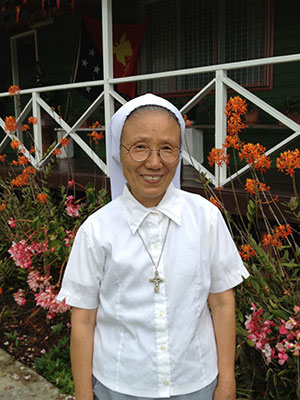 “Even though Papua New Guinea is a Christian country many people don’t have a Bible. I was fortunate to have had five groups of adults and five youth groups who completed the Bible from Genesis to Revelation,” she said.

“There are not enough schools for the children to attend school. Also, there are not enough jobs even when some youth do complete their schooling. So oftentimes the youth are wandering with little to do. Providing a bible study gave young people one constructive way to use their time,” Sr. Marie Benedicta added.

Fifty per cent of the people of PNG are illiterate. Providing Pidgin class has been helpful for their learning and development. “I have found that it is very difficult to support the illiterate in their dreams in this technological world. Therefore, Tok Pidgin school gives these people another opportunity to express themselves. By teaching them how to read and write it is then possible to learn more about sewing, cooking, and the computer. 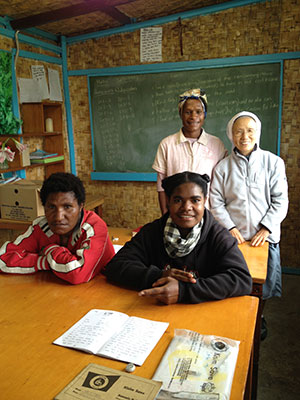 “One woman who showed leadership qualities helped me in the Pidgin literacy class and I trained her in various ways of teaching Bible Class, sewing, technical programs and management skills. She is filled with zeal and enthusiasm to carry out the task for the poor people, especially people living with HIV,” Sr. Marie Benedicta continued.

Sister cites bringing people together to pray on special occasions as a very positive ministry she was also engaged in during special occasions. Prayer group participants reflected on the past year and shared faith with one another.

Over the years Sister has been active in the International Congress on AIDS in Asia and the Pacific (ICAAP) and recently attended the 11th Annual Congress in November. During her time there she was able to interview important leaders of various faiths who are impacted with HIV. Sr. Marie Benedicta sees the Church as a church of love and mercy, and believes we should live fully with respect for each other’s dignity.

“Every one of us is precious and loved by God as we are. People are like different musical notes that all come together and live in harmony, breathtakingly and wondrously as a masterpiece of music. This masterpiece of Music is to build JPIC (Justice, Peace, and Integrity of Creation) which is THE KINGDOM OF GOD.”