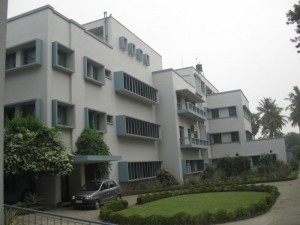 Our Lady of the Assumption Provincial Center

Our Lady of the Assumption Province

Established as a Province in 1961

On the invitation of Rt. Rev. A.F. Wildermuth, SJ, Bishop of India, Christ the King
Province sent 6 Sisters to start the mission in India. They arrived in Jamalpur on
October 31, 1949 and each year the whole Province celebrates October 31 st as
Pioneers’ Day. Over the years, 12 more missionaries from USA have served in India as
members of the Assumption Province. The Novitiate opened in Jamalpur in 1954 and
since then, more than 300 Indian women have professed vows as Sisters of Notre
Dame.
In 1950 we opened Notre Dame Academy (an English medium school, from
Kindergarten through Standard 11), preparing girls to take the Cambridge Overseas
Examination, which is now the Indian School Certificate Exam. The Sisters also
administered and taught in St. Joseph Parish Hindi Medium School. Since that time,
our sisters have opened many Hindi and English medium schools in different States of
India in response to requests. We have established over 30 mission stations in both
North and South of India. Our sisters also began their medical work in 1949, opening a
small dispensary in Jamalpur. Since then, the sisters have been trained as doctors and
nurses to carry on medical work in our Health Centres.
In 1992, three Indian sisters were sent from Patna to start a mission in Arusha,
Tanzania, East Africa. The three pioneers initially taught and administered a

diocesan boarding school (Ngarenaro) for girls. Over the years 15 more Indian Sisters
have served in East Africa. A formation house for African young women was built at
Njiro, Arusha in 2001. The Mission in Tanzania and Kenya was constituted into a
delegation under the Assumption Province on May 10, 2009, with the name “Holy
Spirit Province Delegation” The total number of houses in the Holy Spirit Delegation
were eight: 1)St. Joseph’s, Ngarenaro, Arusha; 2)Formation House, Njiro;3) Zinduka,
Njiro; 4)Don Bosco, Shinyanga; 5)Mount Sinai, mlolongo, Nairobi, Kenya;6)Syokimau
Nairobi; 7)Simanjiro, Tanzania and 8)Kiomboi, Tanzania. In 2015 the two houses in
Uganda under the U.S. Provinces, were amalgamated with the houses in Tanzania and
Kenya and brought directly under the Generalate as “Holy Spirit General Delegation.”
Another major change was that the Indian Missionary Sisters have been transferred
back to India most of them returning between 2021 and 2022.

A major event was the bifurcation of the Assumption Province in December 2004,
constituting the houses in the States of Kerala, Andhra, Karnataka and Tamil Nadu and
Maharashtra into the new Province of “Our Lady of the Visitation” with its Provincial
Centre in Bangalore, Karnataka.

Visit the Sisters of Notre Dame in Patna, India
Our Lady of the Assumption Province Website