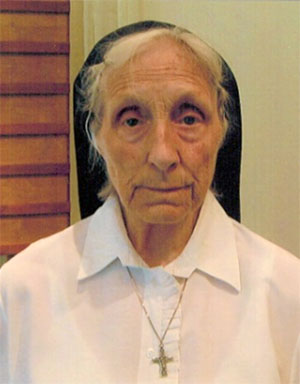 Elizabeth Morris was born in London, and she received her education at various convent schools in the UK, including Ireland.  After her school years she began training as a nurse with the Daughters of the Cross in Hale, Cornwall.  Here she met Eileen Evans (later Sister Mary Bernadette) and they remained life-long friends.  Her contact with the Sisters of Our Lady (as which our sisters are known in England) began in Wimbledon where the Sisters were looking after the Apostolic Delegate, Cardinal Godfrey. She experienced many humorous incidents as the Sisters had only recently arrived from Germany and their language and culture were very different!

In 1949 Elizabeth asked permission to join the community in Hoddesdon where she had been a visitor.  She was the first English postulant, novice and Sister and experienced many different and difficult situations.  The following year she was joined by Eileen Evans and the next year by Eileen Gleeson (Sister Mary Therese). The new postulant continued with domestic work in the two houses in Hoddesdon, Stella Maris and St Cross. In 1959 Sister resumed her studies, this time as a trainee teacher in Liverpool. On completing her qualifications she taught in our High School in Kettering until it closed in the early seventies. Her pupils always passed their exams as she gave them so much extra time. Many of them were still in contact with her at her death. One of her last “Get Well Cards” was from one of these pupils. They all remember “Sister Liz”, as they called her.

At the close of the school Sister returned to her nurse’s training. She completed many different courses in the field of medicine while living in a small flat in the East End of London. Back in Kettering the Sisters were ageing and needed looking after. She returned home to manage their care. Her work continued in the local hospital in Kettering where she trained nurses, many of whom we meet when we are there. She continued her own studies in various therapies. In the last years she walked the streets talking, listening, helping, taking the Eucharist to many housebound people.

A few years ago she fell and broke her hip. This led to hospitalisation and convalescence for some time. She tried living on her own but eventually agreed to go to Nazareth House in Northampton to be helped. Then her body began to fail. She could no longer walk or hold her head up. A virus in the home made it necessary for her to go to hospital where she remained for a couple of weeks before she died from aspiration pneumonia.  We were able to visit her daily and were present with her as she passed quietly from this life to the next.  She will be remembered far beyond the streets of this town.