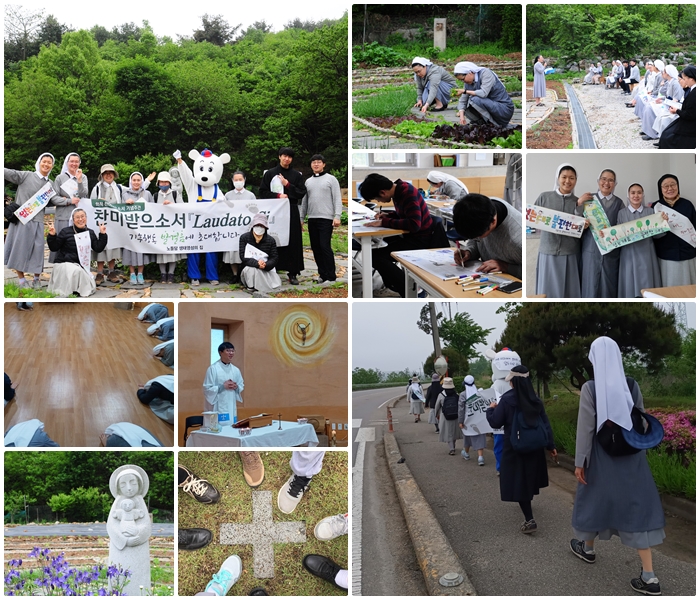 Marking five years after the proclamation of the encyclical Laudato Si, Pope Francis invited the whole church to observe May 16 to 24 as Laudato Si Week, responding to the climate crisis. Inspired by his invitation, the ND Eco Spiritual Center in Ganghwa Island created a program called “Climate Action Steps” on May 16 to 17 in which eight of our sisters and Novice Director Fr. Ireneo Lee and his novice Anselm from the Missionaries of Sacred Heart took part.

We arrived at the spiritual center about 3 p.m. on Saturday, May 16, welcomed by the lush green of May, by the beautiful produce of the fields, the fruits of the sisters’ labors, and by the animals there.  Having gathered in a lecture hall, we listened to Sister Carmel’s explanation of the program’s purpose.

She also explained that the current Covid-19 crisis is not unrelated to climate change, and unless we alter our lifestyle with ecological conversion before it is too late, our planet earth as well as the entire human race would not be able to sustain itself. With this in mind, each one of us started to produce a banner showing her/his own resolution to make a difference.

After supper, as we sat around the statue of Mary on the labyrinth, Sister Ancilla Maria led the evening prayer. It was the praise of God from our united hearts combined with all sorts of nature’s sounds.  The first day was closed with the film An Inconvenient Truth 2 by Al Gore, followed by sharing.

The next day began with Prayer with the Body in the Eco-Spirituality Wing. Reflecting on the prayers that hold praise to God for his creation, contrition for the environmental destruction by human greed, and our determination to restore the planet earth, we offered forty moments of bows to God.

After the Mass celebrated by Fr. Lee, we launched our Climate Action Steps. Wearing our own banners and carrying a big placard for the whole group, we prayed the rosary as we walked 9.4 km along the seaside road to the Gabgot Martyrs Shrine.  Every single step we took held our ardent wishes to contribute to the beginning of restoring the environment with our small actions so that coming generations will be able to enjoy this beautiful nature. Many cars passing us showed some interest and noticeably slowed their speed to read our banners.

We concluded this grace-filled time with the renewed realization that it is high time we paid attention to the cries of the earth and the poor.  We prayed for them together in each ministry and community and moved to change our lifestyle to protect our common home before it becomes too late.

God, who created the world, be praised!  Amen.