From English Class and beyond, Rome, Italy 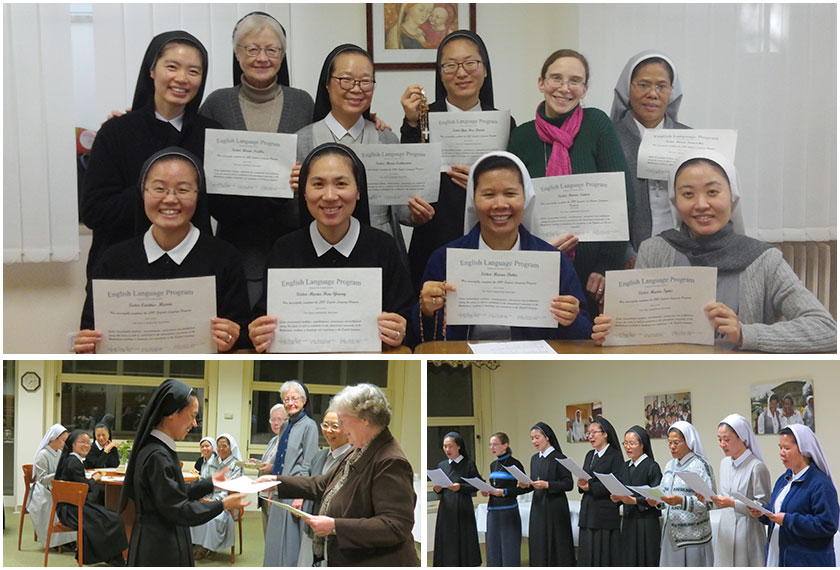 After 10 months the third English Language Course has come to an end.  Following supper on November 23rd Sister Mary Kristin presented each of the eight students with a Certificate of Completion.  In response each Sister shared words of personal gratitude and then as a group sang a song of gratitude.

This year’s group was privileged in several ways. In April, they participated in a Christology and Theology Course entitled Genesis to Jesus taught by Sister Mary Kathleen Burns from California.  From September 19 to November 11, they were taught by Sister Mary Rita Geoppinger, an experienced teacher and a former missionary in Uganda, from the Covington province while their teacher, Sr. Maria Josefa, participated as a translator in the General Chapter.

One of the students, Sister Sintea Maria from Brazil, who was already acquainted with the English language had the opportunity to spend several months in Marienhain/Vechta to become more proficient in speaking German, her ancestral language.

During their last week at the Motherhouse, the students participated in a transformational leadership seminar presented by Dr. Jeanne Tapke, an associate of the Sisters of Notre Dame from the Covington province.

We are grateful to the students, representing Brazil, Indonesia and South Korea, for their joyful presence and for their generous service to the Motherhouse community. We wish them God’s blessing in their new ministries.