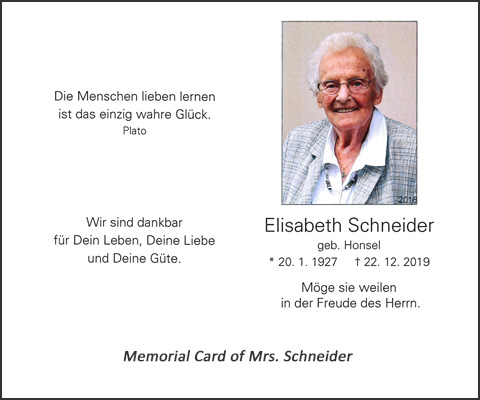 At the beginning of the year we received word that Mrs. Elisabeth Schneider, née Honsel, died in Bocholt, Germany, on December 22, 2019. Mrs. Schneider was one of the relatives of Sister Maria Aloysia with whom we were in contact and whom many sisters will certainly remember. For many years she welcomed our pilgrim sisters into her house in Bocholt, rejoiced in sharing with them about our knowledge of Sister Maria Aloysia and was very interested in new developments in the congregation which her relative had founded. 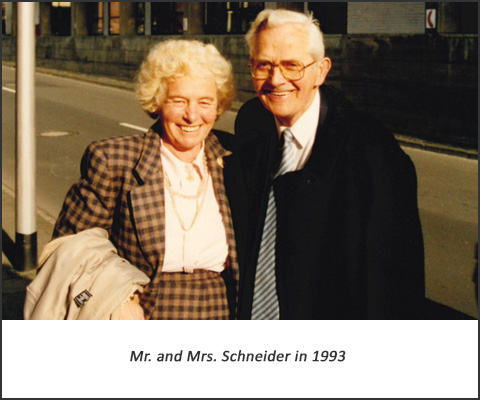 Mrs. Schneider was the wife of Mr. Werner Schneider, who researched the family tree of the Pirick – Wolbring – Honsel family in the 70s and 80s of the past century and transcribed the letters of Sister Maria Aloysia which were kept in the Honsel Family at the time. He also is the author of the book “Making Gold out of stones,” in which the letters are printed and which is well known by all the sisters. When the family gifted our congregation with the original letters on the occasion of our 150th anniversary in the year 2000, Mr. Schneider had already gone home to God, but his wife was present for this significant moment on the farm of her brother Klemens Honsel and welcomed our entire large group into her home in Bocholt afterwards. 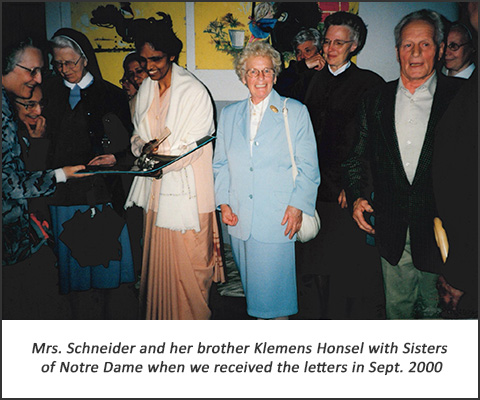 As the news about her passing did not reach us right away because of the holidays, no Sister of Notre Dame was able to attend the funeral, but Mrs. Schneider and her family were included in many prayers around the world. Also in the motherhouse, we remembered them and celebrated a holy Mass in Memory of Mrs. Schneider on January 20, 2020. It was a special gift for us that three sisters were able to participate in a special memorial Mass for her six weeks after her death on February 2 in Bocholt. Sr. M. Elke Baumann from the motherhouse, who happened to be in Coesfeld at the time, Sr. M. Margret Koch and Sr. M. Marthrud Berkemeier, who had lived in Bocholt for more than 30 years and had known Mrs. Schneider quite well, drove to Bocholt for the occasion. 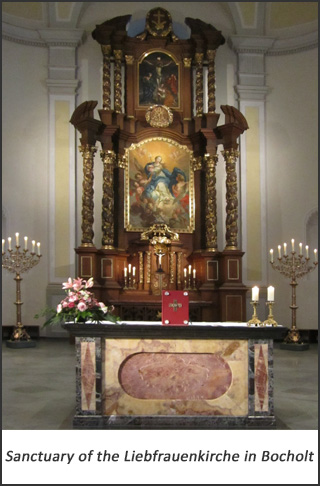 It was a moving experience for us to be present for the Mass in memory of Mrs. Schneider that took place in the Liebfrauenkirche, a church which also Sr. M. Aloysia had known. The building had been destroyed in 1945, but the altar remained intact and the church was later reconstructed.

Following the Mass, the Schneider family invited us to brunch, and having good conversations with different family members, time passed very quickly. It was interesting to learn that a number of them work in the medical field or engage in assisting migrants or children who live in challenging situations and similar groups and support people who minister in mission countries. One might wonder if this is orchestrated by the spirit of Sr. Maria Aloysia…

Grateful for the enriching encounters we said good-bye and promised to continue to include the Schneider family in our prayers. Some are planning to visit the exhibit on the history of our congregation in Coesfeld or to visit our motherhouse in Rome. We will be very happy to reciprocate the hospitality and to stay in contact with the Schneider Family.

0
SHARES
Share on FacebookShare on Twitter
Crib Exhibition by Haus Emmaus, Coesfeld, Germany
Experiencing the Body of Christ at the Border