Pilgrimage with Jesus in Tanzania, Africa

PILGRIMAGE WITH JESUS IN TANZANIA, AFRICA 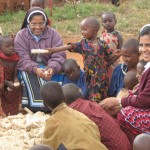 Yes, Jesus brought me to Africa when I had resisted saying there is enough to be done in India! He has journeyed with me ever since, manifesting Himself in and through our people and through varied events. When I faced challenges He strengthened me, when I discerned He enlightened me. He is my ‘Mission and my Vision’ as I move ahead with Him as a woman disciple! I began my mission by organizing rural, marginalized women into self help groups with an aim of empowering them towards self-reliance and leadership. The women have shown steady growth by taking new initiatives and steps to bring about transformation in the society. As I look back I have much to be grateful for. Motivating the rural women to be ‘agents of transformation’ in the society, we have been able to move ahead. Zinduka Women Center has five nurseries in the remote villages, catering to more than 300 children who would not be in school otherwise.

St. Julie Nursery classes were begun in Notre Dame Compound in our garage. When we invited the neighborhood children who were not going to school, little did we realize that there were so many children living in difficult environment. In no time the number went above 50-60. The young people in our Formation became very active shaping the lives of these little children. Their fast improvement and the response of the parents boosted our spirits. The classes continue to this day and we have been able to absorb many of them into Notre Dame Primary classes. The rest join the local primary school who will accept only those who have completed the nursery.

ND Zinduka (Awake!) Nursery, Lemara is part of a local Government School. While organizing the rural women into Self Help Groups in an area called Lemara, it was noticed that many children of school –going age were not in school. Instead, they were playing in the dirty sewage water flowing through the village. Seeing the danger the children were exposed to, I invited the women to come together to find a solution. They started talking to the other women and we decided to begin a nursery to prepare the children for primary education because many could not afford to send their children to a proper school. At that time there was no nursery in the Government School. In three days we admitted 174 children and we had to put a full stop. It was overwhelming to receive so many. But we had nowhere to gather them. Our plan was only to gather them under a tree to be taught by the women. I wrote SOS letters to all the local government leaders explaining the situation. We were shown a few rooms in a dilapidated Gov. Primary School which we accepted gladly. We collected around 200 sacks (wheat bags) from our Secondary School in Ngarenaro, sat on the broken floor of the classroom with no proper doors or windows, we began the school. The performance of the children soon caught the eyes of the authority and in no time we were given three rooms with desks and chairs. During the past six years we have prepared over 800 children. There is always a rush for admission and we have to refuse many because there is no space to accommodate them. The parents are even willing to donate a chair if we would only admit their children. But the school does not have space.

Nyota Zinduka Nursery (Awakening Star), Lesoit was another surprise gift from the Lord! During our long trips to the interior Masaai villages, we came across many really old people who were just sitting around for their day of return. We motivated the women to gather them and to honor them. We also gathered the children once a week under a tree, seated on stones, arranged by the women. An elder in the village was inspired to donate half an acre of land so that we would continue our work with the children. The villagers gave full cooperation to celebrate the ‘Africa child’ and to put up a small shed. Every woman and families of children brought two strong branches to build it. Then Sr. Sujita came to our rescue by inviting the ‘Dialogue Project’ from Germany who came and built a multi-purpose Hall and a few small rooms for Nyota Nursery. This is the fourth year and we have 62children there.

Juhudi (Joint Effort) Zinduka Nursery, Muriet: was the outcome of another group of enlightened women. We challenged the women to do something to benefit the society and they took up the issue of the little children who had a long way to school. Therefore many did not join school until later. One of the women in the group who was a widow donated quarter of an acre for this purpose and one woman started teaching the neighborhood children who were gathered. When the rainy season started we had to stop the classes. Later the parents were invited for a meeting and the matter was presented. They agreed to donate one long piece of wood each and a wooden shed was built. It was later extended when the number of the children increased. The German volunteers added to the spirit of the school. The children who sat on the muddy ground were doing very well. We had our beloved Sr. Almuth from Germany who was permitted to come and help us build a classroom there and we are delighted. A neighbor who saw our work was inspired to help us build one wall.

Tegemeo (Supportive) Zinduka Nursery, Engaunet: is another gift from the Lord of surprises. Coming to know about the performance of Zinduka nurseries, some women from Engaunet came to request to start a school there. Since the place is very far, I resisted, but they persevered. So, I challenge the women to find a place and a teacher and to start the school. Zinduka Animators were encouraged to motivate and support the women. In no time the women managed to get a small piece of land and found a teacher. Stones were arranged in lines for the seats. A few tree branches were planted around and plastic pieces were tied to enclose the place. It was all destroyed and I called the parents and the villagers together. The matter was presented to them. Although it was a time of starvation, all agreed to cooperate. I suggested that every family contribute a handful of maize for the celebration of Africa Child. The whole village came together for a wonderful celebration and the parents were motivated to seek help and put up a wooden shed, although half finished. Listening to the problems of the people in that remote village, Kenyan Commercial Bank (KCB) agreed to put up one classroom. It is still in the process of completion and the people started dreaming of a brighter future. They have no books pencils or teaching materials. But, stones and leaves and seeds have helped them to learn their lessons. Their singing resonates in the neighborhood.

This is just one of the many activities of Zinduka Women Center. There have been many challenges. But, the good God came alive again and again through our simple people who were ready to share what they had. It is very inspiring and encouraging to journey with them. We have always adapted a participatory approach to initiate new programs. The people are also encouraged to contribute little by way of cash or kind towards the maintenance of this project.

God be praised for every ‘widows-mite’, that has brought us this far! Many of the children come from difficult environment. I am often reminded of Sr. Maria Aloysia who would accept the little children with more tenderness and love, the poorer they were!

2
SHARES
Share on FacebookShare on Twitter
A New Call to Mission Among the Masai People of Simanjiro, Tanzania
Sister Honored for Ministry in Acre