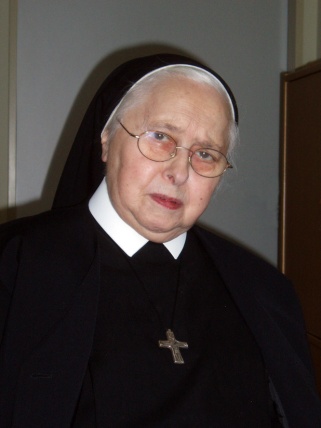 Adele grew up in a large family on her parental farm. At an early age, she and her siblings had to assist with all the work in the fields and in the house.

From 1933 to 1941, Adele attended the Catholic basic primary and secondary school in Wippingen. The following years of her life were marked by the Second World War. Until 1949 she lived with her relatives to support their families because their sons served as soldiers in the war. From 1949 to 1950, Adele was an apprentice cook in Notre Dame High School in Büren. For several years she then worked in different families to replace a deceased or a sick mother.

These varied activities led to the fact that only in 1956 could Adele realize her wish to seek admission into the Congregation of the Sisters of Notre Dame in Coesfeld.

After her religious formation, Sister Maria Angelika served in various houses, first in Büren, then in Coesfeld. She was in charge of the kitchen, the cafeteria, and the guests. Apart from several short interruptions, she mainly lived and worked in Büren, where she stayed for forty-one years.

With great dedication, and supported by her employees, Sister Maria Angelika took care of the cleanliness of the rooms in the school and in the house. She did this hard work quietly and happily for several decades. The laundry and the garden were also part of her work. Besides these activities, Sr. M. Angelika also cared for the well-being of the employees. She lovingly accompanied them and was interested in their lives.

Sister Maria Angelika contributed to life in the community by her joyful presence and by her “dry humor“ – as a co-sister expressed it. She showed an interest in everything concerning the community. She could also withdraw to be alone; she was contented.

Sister had a good relationship with her family all her life, especially with her twin sister. This was still important to her in old age when her physical strength was failing.

During her “retirement” in Kloster Annenthal from 2004 on, she had more time for personal interests. She loved making things with her hands for the sisters and for her relatives. She was grateful for the loving care given to her by the staff in the infirmary, the employees of the social service, and the company of her co-sisters.

We are convinced that Sr. M. Angelika now lives forever with our resurrected Lord.