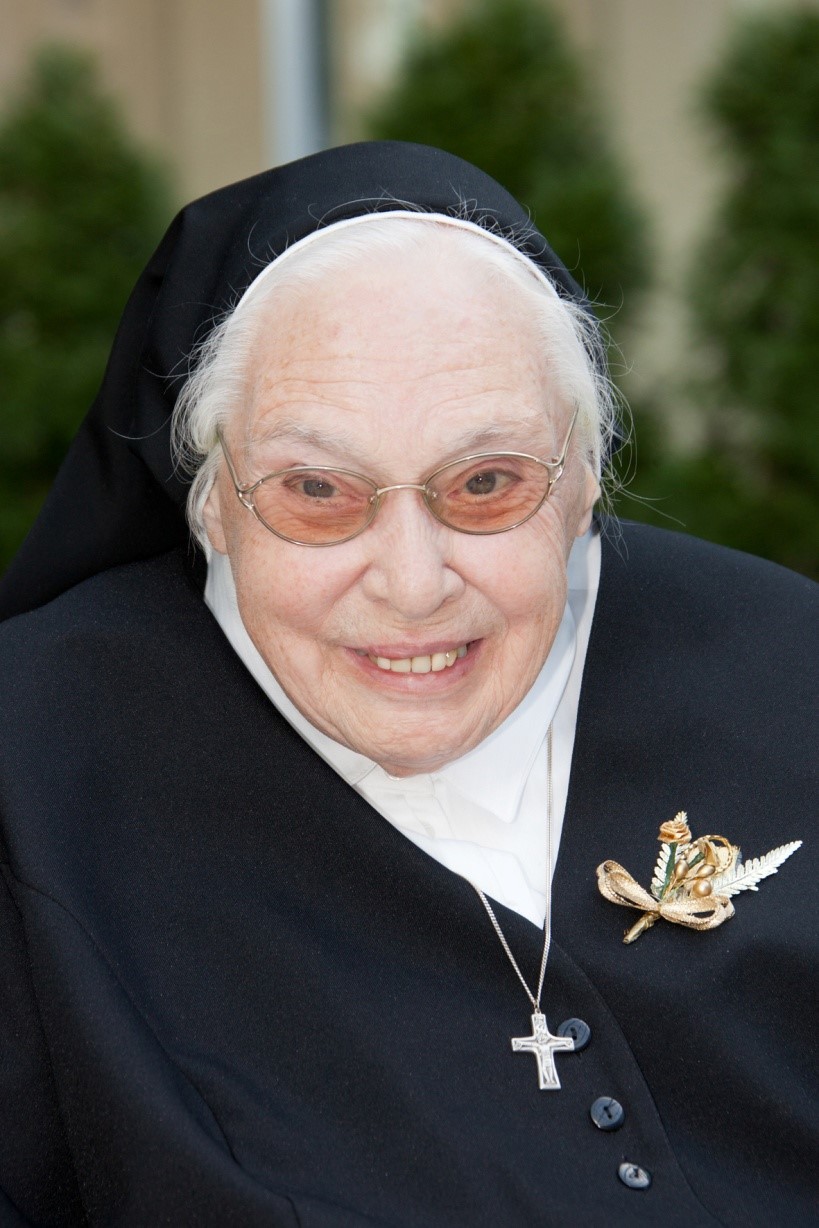 Hannelore Neve grew up with a brother and a sister in the safety of their religious parental home in the west of Westphalia. Hannelore was the eldest of the three children.

From 1940 – 1948 Hannelore attended basic primary and secondary school and then she started a commercial apprenticeship of three years, which she completed successfully. Until her entrance, she worked as a specialized shop assistant in different businesses. All her bosses underlined her professional competence as well as her friendliness, her commitment and her collegiality in their respective reports. She was a highly appreciated shop assistant.

As a young woman, Hannelore had already the wish to serve God in a religious congregation. Out of consideration for her parents, she postponed her wish for several years because her sister Marlies, our Sister Maria Fernandis, also felt called to religious life and wanted to enter.

In May 1963, Hannelore could finally enter our congregation and start her religious formation. At her investment, she received the name Sister Maria Fortunatis.

During her over 50 years of religious life, Sister ministered in different houses of our community, mainly in the domestic area. She completed a training as state-certified housekeeper and after several ongoing courses, she received the license to train domestic apprentices. Sister Maria Fortunatis wanted to give her apprentices a good professional training and, on top of that, she wanted to convey human and social values as well as the values of the Christian faith.

In some communities, Sister was in charge of the chapel beside the domestic work. Because of her training as a sacristan, she was entrusted with the job of a sacristan in the parish church in Warstein-Allagen from 1997 – 2012. By fulfilling this ministry with great commitment, respect, and dignity, she gave a testimony to the parishioners without many words.

In addition to her commitment in different ministries and her contribution to a good community life, her relationship to her family and caring for them in special situations was very important to Sr. M. Fortunatis. Together with Sr. M. Ferdinandis she took care of their mother for 1 ½ years.

During the years of Sister Maria Ferdinandis’ illness, Sister Maria Fortunatis assisted her untiringly until her death on 31st August 1999. She likewise supported her brother after his wife’s sudden death in 2014.

During the last years, Sister Maria Fortunatis suffered from different health problems, which she bravely bore with serenity and without complaint. When her weakness was increasing during the last weeks, she gratefully accepted the help and support of the staff at the infirmary and of her co-sisters. She felt secure.

May Sister Maria Fortunatis now find her last and deepest security in the fulfillment of God’s promise “You are mine”!