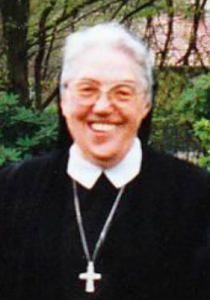 God called our Sister Maria Hildeburgis to himself very unexpectedly on April 30. We wish and pray that she may find the fulfillment of her strong hope and faith in her eternal home with God.

Hannelore Eying was born on November 21, 1928, and had an emergency baptism on the same day. According to the wish of her parents Hubert Eying and Wilhelmine, born Egbers, she was baptized Hannelore. Obviously, people worried about her life. Thus, her existence was given a harsh trait right from the beginning, which accompanied her all her life in the form of a difficulty in articulating words clearly.

In spite of this handicap, her childhood and youth were like those of her siblings and friends. In 1934, she made her first communion, and she was confirmed in the same year. Like her parents, she remained faithful to the Catholic religion and Church during the so-called Third Reich and attended extracurricular religion classes during her school days.

After completing the basic primary and secondary school, she attended a business school and was then trained as a seamstress. After receiving her craftsman’s diploma as dressmaker, she completed her skills by successfully participating in various special courses.

Well integrated in her family and her neighborhood, she participated in the life of her parish and was known as an understanding young woman ready to help others and open to their needs. This is how the priest of her parish characterized her in his reference. In 1967, she decided to continue her life as a Sister of Notre Dame and in 1968, she started her religious formation in the novitiate of our Congregation in the Liebfrauenburg in Coesfeld. In 1974, at the end of her tertiate in Rome, she made her perpetual profession and in 1995, she could celebrate her silver jubilee.

Throughout her life, Mary, Mother of God, was especially near to her as a helper and sister in faith. Her many years of ministry offering of sewing classes and teaching needlework corresponded to Sr. M. Hildeburgis‘ wish for independence. In addition, she had received the Missio Canonica certificate enabling her to give extracurricular religion classes. A training as a verger enabled her later, from 1985-1991, to perform duties in the parish church in Nottuln, thus she could directly participate in services. When her strength was failing, she she was able to minister only part-time. Corresponding to her craftsmanship, she mainly took care of the chasubles, a duty which she performed until 2005.

From her retirement in 2006 on she increasingly suffered from infirmities caused by old age, like diabetes etc. and she withdrew more and more. Only with some difficulty was she able to accept the necessary limitations of her independence; therefore it was not always easy for her co-sisters and for others to meet Sister Hildeburgis’ needs and expectations. That became even more obvious when she was transferred to Kloster Annenthal, the infirmary, where it was not easy for her to settle in.

That is why we may perhaps consider it a loving act of divine providence that she could relatively quickly go home to the graceful and liberating eternal life in God.