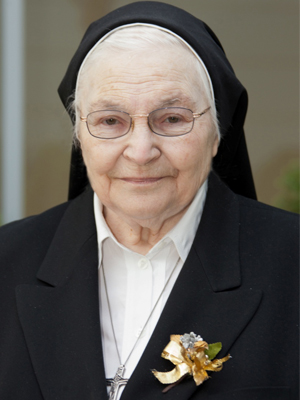 Sister Maria Hildegaris grew up as the only child of Mr. and Mrs. Schier in Stettin in today’s Poland. The family was Lutheran. Her happy childhood was overshadowed by the sudden death of her father in 1936. The Second World War was a difficult and formative time for Ilse. Her home town was badly damaged by air raids and the property of her parents, they had a pharmacy, was destroyed. The school was evacuated to the island of Rügen and later for one year to Demmin / Pomerania. There she obtained her secondary school certificate.

In the fall of 1944, Ilse was sent to serve in the war. Together with others, she had to dig trenches near the Polish border. During that time, she was very worried about her mother, who was exposed to horrible bomb attacks and who fell seriously ill because of the difficult war conditions. After being evacuated by the municipal authorities to Gartz / Oder, Ilse had to work in an arms factory. On March 6, 1945, people were expelled from their homes. Under difficult circumstances, Ilse and her mother moved for weeks from the East to the West. They were accommodated by farmers in the South Oldenburg Region, which is mostly Catholic. She had to work hard to earn her living. Her mother died in April 1947.

Her difficult situation made Ilse think about the sense of her life and how it could go on. In this process, she found the Catholic Faith. In December 1947, she became a member of the Catholic church.

In May 1955, Ilse answered the call of the Lord to follow Him and asked for admission to the novitiate of our Congregation in Coesfeld. After her religious formation, she continued her studies to become a high school teacher. She taught at different schools in our Congregation. Students and colleagues trusted and appreciated her because of her well-prepared lessons, her kindness and her readiness to help. Apart from her teaching ministry, Sister Maria Hildegaris was engaged in a literature circle and in a Bible circle for many years. After her retirement, she continued both these circles. She assisted in the library for teachers and students at the Liebfrauenschule Coesfeld and in the library at Kloster Annenthal.

During her last years, she showed signs of dementia, which became more and more obvious. Especially during this phase of her life, a co-sister faithfully accompanied her with great love and generosity. Sister was very self-determined until her death, but as far as possible her co-sisters and employees assisted her. Her friends also accompanied her faithfully. In hindsight, it is consoling to us that her two friends from Bonn visited her a short time before her death and she spent some nice hours with them.

May these last joys on earth now lead Sister Maria Hildegaris to the deep and never ending happiness to be forever with the Lord, her Good Shepherd.