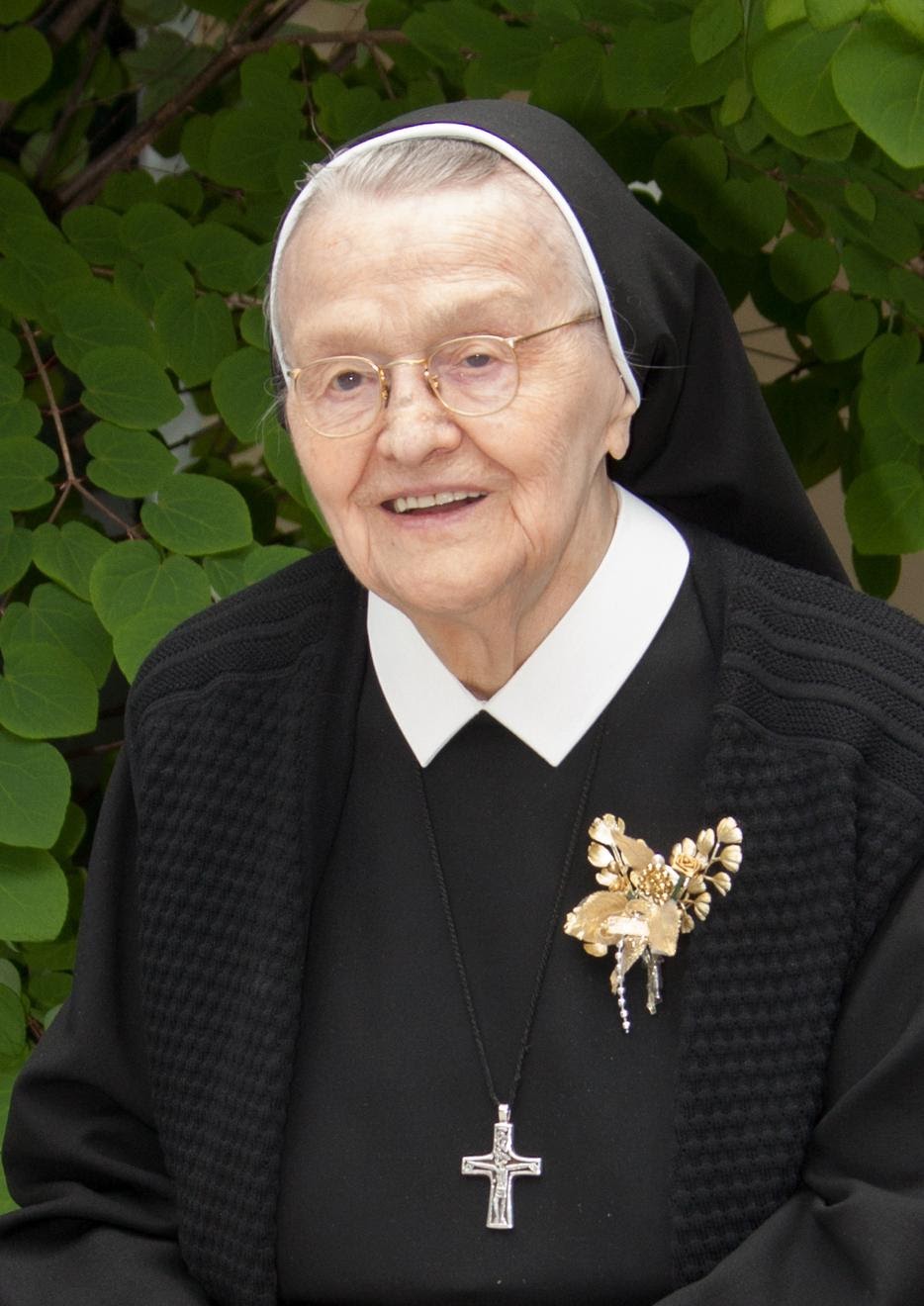 Lord, take us to Mount Tabor to show us your light. Let our hope ascend with you to God.
You will transfigure us, too, Lord of Lords.

Euphemia Hueske was born in Stadtlohn. She was the fifth of the nine children born to Herman and Christine Hueske, who were farmers. She described her life on the farm as plain and simple and marked by deep faith.

From 1921 – 1929, Euphemia attended the catholic basic and secondary school and then, until 1932, the housekeeping school in Stadtlohn. Before she attended the school for farming and housekeeping in Marienhain Vechta from 1934 – 1935, her help was needed on her parental farm and in her big family. In Marienhain, Euphemia got to know the Sisters of Notre Dame. But it took her a while until she entered in Mülhausen in 1942. When she was interviewed, she said, “I experienced inner unrest because I was still searching.” In the middle of the Second World War, she decided to enter, which had to be kept secret. After the convent in Mülhausen had been changed into a military hospital, the congregation moved the novitiate to Cloppenburg. Here, Euphemia was clothed quietly and secretly and received the name Sister Maria Irmgarde.

During the war, Sister completed a course as an assistant nurse in Ahlen and was sent to the local mili-tary hospital. After the war, her skills as a nurse were used in the infirmary in Mülhausen, in the boarding school in Rheinbach, and in the children’s home in Porta Westfalica. During that time, her penchant for business and administration became obvious. At the age of 33, she attended the commercial college in Ahlen for two years. After completing that training, she was well prepared for her professional mission in life at the Caritas association in Münster. For 30 years, she organized recuperation holidays for children and cures for mothers at the Caritas association of the diocese. She maintained good contacts to her then boss, the later auxiliary bishop, Dr. Josef Voss, until he died. When she retired, Sister Maria Irmgarde went back to Ahlen. There she took over bookkeeping and assisted at the portress.

In 1996, Sister Maria Irmgarde came to Kloster Annenthal to spend her twilight years there. She loved being of service and was happy to be at home in the community. With increasing age, her eyesight and her hearing gradually deteriorated. In spite of that she tried to be informed about all the events in our worldwide congregation. She also maintained a lively interest in the Church and in politics. All the issues of the congregation, the Church, and her family were included in her prayers, because praying became more and more her daily occupation. When she was driving in her wheelchair along the hallways to the oratory until one week before her death, the rosary was her constant companion.

Sister Maria Irmgarde maintained good contacts to her big family. She was happy when her nieces and nephews came for a visit. Jubilees and birthdays had always been occasions for family gatherings. It was a special joy for her when her natural sister, Sister Radegundis, who belongs to the Congregation of Divine Providence, came to visit her for a few days. These visits were opportunities to remember common experiences from the past, to share news about the family, and especially to pray together.

About a week before she passed away, she became so weak that she could not leave her bed anymore. Sister Radegundis and some nieces and nephews could visit her a last time. Sister Maria Irmgarde was given 104 years and 10 months to climb the Mountain of Transfiguration. In the evening of the Feast of Transfiguration, she had reached the peak of the mountain.

Now she can contemplate our transfigured Lord face to face.