I will praise you Lord, for your loving kindness and your truth, for you have magnified your word above all your name. In the day when I cried out, you answered me, and made me bold with strength in my soul.”  (Psalm 138) 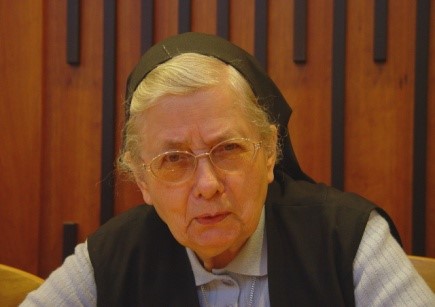 Sister Maria Joanni was the third of the twelve children of Johannes van Gog and Johanna Manders; there were 4 boys and 8 girls. In the beginning, the family lived in Deurne. But soon they moved to Milheeze where the father built a big house close to his work with enough space for his kids to play.

Sister Maria Joanni had a good youth amongst her many brothers and sisters and her religious and devoted parents. In the evenings, especially on Sundays or Feast days, they would make music together. Her father and brothers played the accordion and because of the homely atmosphere, the bond was very strong.

In 1938, Sister Maria Joanni met the Sisters of Notre Dame in Milheeze. She wanted to become a sister too and she left for Tegelen that same year to become a candidate. She loved it, but still she was happy to go back home during the holidays and enjoyed the warmth and coziness of her family.

After her profession, she was trained as a kindergarten teacher and taught in the primary schools in Waubach and Weert for several years.

In 1953, she left as a missionary to Indonesia, where she worked as a teacher first

and later on became the treasurer. She spent 30 years of her life there and lived her mission with all her heart and all her soul. Apart from her work, she also guided groups of young boys and girls, men and women in catechesis. Based upon her own inner close bond with God, Sister Maria Joanni tried to bring people she met closer to God.

After she returned to the Netherlands in 1982, she was the treasurer in Tegelen for many years and she also played the organ. She never stopped trying to support the mission in Indonesia.

In her long life, Sister Maria Joanni found strength and courage in prayer.

May God, whose outstretched hand she has felt so often during her life, now take her into His Grace.