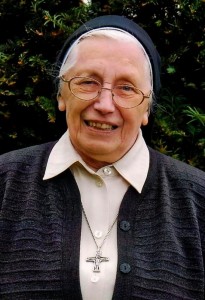 “I only have to do what the good God asks me to do from moment to moment.“
(Julie Billiart)

This saying of our spiritual mother characterized Sr. M. Juvina’s inner attitude throughout her religious life. She was always attentive to recognize and to make use of the signs of the moment.

Christine Esseling was born on May 10, 1925 in Vreden-Gaxel. She was the seventh of nine children and in her big family she was educated in a Christian way. After graduating from school she went for business education from 1940 through the spring of 1943. During that time she was active in many ways in the parish. Contemporary witnesses remember that the young lay helper incurred the Nazis’ displeasure. Her fearless conduct finally led to several interrogations by the Gestapo. The NS-party’s way of solving the “problem” was a draft card sending her to the Reich’s labor service in Mecklenburg-Vorpommern in 1943, thereby making an end to her courageous commitment in the parish.

She was forced to work as an anti-aircraft auxiliary in the military service in Berlin until the end of the war in 1945. From there she fled with a friend from the approaching Soviet army by walking to Vreden. At that time she decided to enter the congregation of the Sisters of Notre Dame. She made her first profession on April 8, 1948, in the then mother house in Mülhausen on the Lower Rhine.

In October 1950, she was transferred to the community in Hoddesdon in England. She received her formation as a teacher in Liverpool. Having obtained the British citizenship, she taught in Hoddesdon and Kettering. From 1965 through 1974 Sister M. Juvina was district superior in England. In 1974, she was elected general assistant of our European communities, thus being able to gain worldwide experiences in Rome. From 1986 – 1995, she was provincial superior of the then Vechta province of the Holy Spirit. With energy and vision Sr. M. Juvina assumed the responsible task of leadership in our quickly changing time. She then spent 14 years in Meppen where she committed herself voluntarily e.g. to the Samaritans.

Her openness, her charming friendliness and her great interest in people characterized Sr. M. Juvina. As a down-to-earth woman religious she radiated confidence and trust.

She spent the last four years of her life with Sr. M. Angelis, her predecessor as provincial superior, in “Salus“ the health care unit in Marienhain. Her failing memory and health awakened in Sr. M. Juvina the wish to go home to her God.

On the morning of March 2, she gave her life back into the hand of our good God. We are sure that she has found her eternal home.