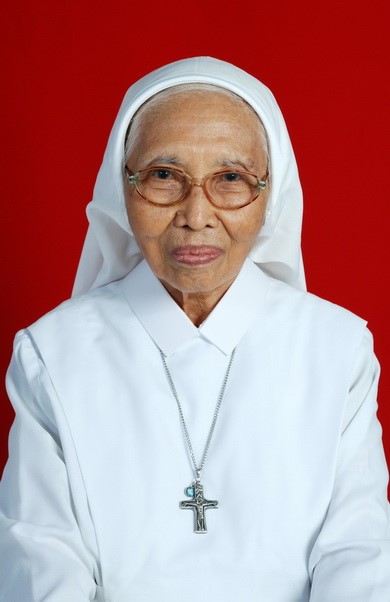 W.Murtijah (Mur) was the eighth child born to Mangunsuharto and Sutariyah. She had three brothers and four sisters, and she was the youngest. She grew up in Sawangan with her loving family. Mur was educated and raised in a Muslim family.

Love for Christ gave her hope to convert to Catholicism through the Sacrament of baptism on August 14, 1955, in Semarang Java Island. She received the Sacrament of confirmation in the same place on November 20, 1956.

Mur completed her high school teacher education, majoring in Natural Sciences, in Semarang. Being a teacher is a talent that she had. Since her youth, Mur wanted to become a religious sister, and she realized her wish by joining the SND congregation in Pekalongan as a postulant on August 15, 1961. At investment on July 8, 1962, she received the name Sister Maria Klara.

After she made her first profession on July 8, 1964, she started her ministry as a teacher at the Pius Pekalongan Junior High School. Her passion for teaching had taken root in her and continued until she made her final vows in Pekalongan on July 7, 1969.

After retiring from educational ministry, Sister Maria Klara accepted a new mission, the apostolate of prayer, at Wisma Hana Pekalongan, the elderly sisters’ house. Sister had dementia due to old age, but she could still hear well and gave joy to others with her beautiful smile. Devotion to the holy family of Nazareth became part of her old age which helped her to rejoice, surrender and welcome all who visited her.

On May 8, 2022, Sister Klara’s health declined, and she was taken to the intensive care unit at Budi Rahayu Hospital, Pekalongan. On May 9, she received the sacrament of the anointing of the sick from the priest of our parish. Sister Maria Klara was united with the holy family of Nazareth in the early morning on Thursday, May 12, 2022.