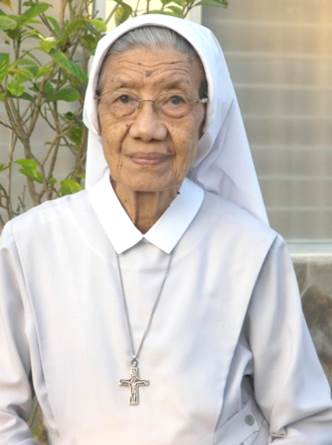 Helena Utami or Kiem Kiok was the sixth child of Tjhie Kwie Seng and Tan Engnie Nio. They had five sons and three daughters. She grew up in a Protestant family in Purbalingga.

Her love for Christ motivated her to become Catholic through the Sacrament of Baptism. Helena was baptized on December 23, 1953 in Purbalingga and received the Sacrament of Confirmation on October 14, 1955 in Purwokerto.

Her years of education were spent in sewing and embroidery and in later years one could witness her as a talented seamstress who created fine works. Her wish to become a sister was realized when she joined the Sisters of Notre Dame on December 25, 1954 as a postulant. On October 29, 1955 she had her investment in Pekalongan and received her religious name: Sr. Maria Laurensia.

Sister Maria Laurensia was a dedicated, hard working, persevering and disciplined person. She felt and experienced God’s love always guided her, both in her life and in her ministries, and on October 21, 1957 his goodness brought her to her first profession, and she was assigned the responsibility of a seamstress in the sewing room of the provincial house.

On July 16, 1962 she professed her final vows in Rome. After her final profession she had the opportunity to develop her talent in sewing by taking the responsibility of the clothes of the community in the sewing room. She was also excellent in cooking and preparing snacks and she was happy to see the sisters in the community enjoy her cooking as she loved to make others happy and was ready to show them how to make some snacks and how to cook well. In managing the administration of the school fees entrusted to her, she was always neat and careful.

Sr. Maria Laurensia’s retirement age was spent in Wisma Hana, where our elder sisters live and she became a member of the Apostolate of prayer. Her independency became an inspiration for us all. Whenever she suffered from some physical pain or faced some troubles she only said that God was good to her and she believed that He knew what was good for her. Beside Jesus, whom Sister Maria Laurensia loved, she was also devoted to Mary and St. Joseph.

In early July Sister’s health was declining. On July 6, 2015 she was hospitalized in our Budi Rahayu Hospital. To all who visited her, she expressed her gratitude and said that God would bless them for their kindness to her. On July 18, very early in the morning, at 04.50 am, our good Lord called Sister Maria Laurensia home to himself, to her eternal home.

God who loves you and whom you love
has called you to himself, dear Sister Maria Laurensia.
Be happy in your eternal home!
You are still in our hearts.