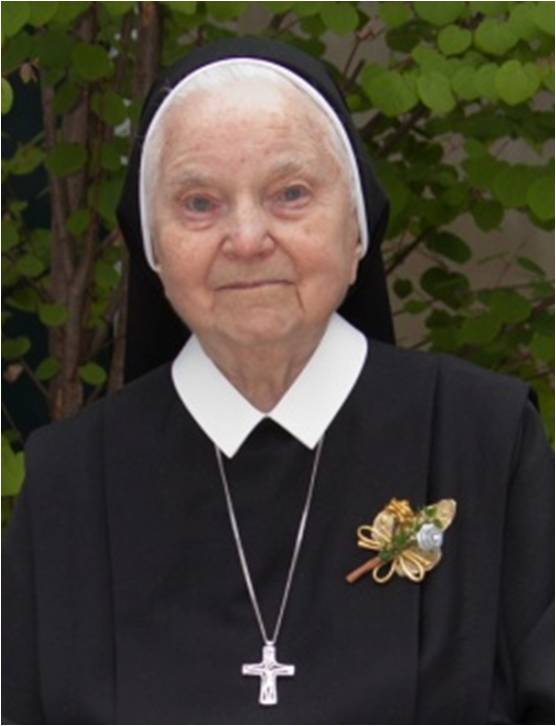 Sister Maria Angelie, Maria Altevers, was born in Biene, County Lingen. With her seven siblings she grew up in their happy parental home.

After finishing basic elementary and secondary school and a housekeeping school, she worked as a housekeeper and then in the large kitchen of the Kolping House in Duisburg.

In 1939, Sr. M. Angelie entered our congregation in Mülhausen/Lower Rhine. She followed the Lord’s call like her sister Angela had already done before her. Until her death, Angela, our Sr. Maria Elmara, had proclaimed God’s goodness and provident care in Brazil for decades.

One year later, her sister Margaretha, our Sr. Maria Bernharde, became a member of our congregation; she generously served God and people until her death in December 2011.

After her religious formation, Sr. M. Angelie ministered in different houses of the congregation. For decades, she was in charge of kitchens and gave cookery courses, which was not always easy during the war and in the post-war period. With great commitment and in faithful performance of duty, she took care of her co-sisters and later, in Allagen, of the children of the parish kindergarten adjacent to the convent. Both adults and children loved her culinary skills.

Sr. M. Angelie radiated loving kindness, benevolence and a “down-to-earth“ spirituality. Many of her former cooking students will confirm that, but especially those who have found their way into our congregation and who had probably been influenced by her personality.

She was a motherly sister. The children of the nursery school loved visiting her in the kitchen and in the garden. During her 27 years there, her simplicity and friendliness certainly marked the atmosphere in the parish.

In 2002, when her strength was failing, Sr. M. Angelie took leave from Allagen and came to Kloster Annenthal. There she assisted in the small kitchen of the infirmary for several years.

Sr. M. Angelie was a woman of prayer. You could often find her in the chapel. All the needs of the congregation and of her family were thought of in her prayers.

In 2012, she was able to celebrate her jubilee of grace, which filled her with gratitude and joy.

In all the challenges during her life she was supported and guided by the words, “Lord, you know everything; you know that I love you“. (Jn 21: 17)

These words now find their eternal fulfillment in the glory of the Lord.