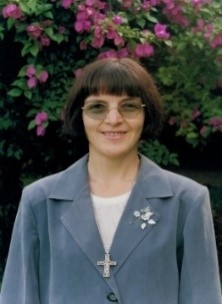 “I will make an everlasting covenant with you!” Is 55:3

This verse from the Scriptures was chosen by Sister M. Salete on the day of her perpetual vows and accompanied her throughout  her life’s journey giving her strength and encouragement in her spiritual life and in the various ministries she carried out.

Salete was the daughter of Pedro Antonio and Eufêmea Chiaretin Bordin, the fourth child among eight siblings. She attended a Rural School and Stella Maris School in Marau and in Viamão. Although she didn’t like to study, Salete’s desire to know how to read and write was awakened through painting and crafts. Realizing the call to religious life, Salete attended the parish´s vocation meetings, which helped her to discern her vocation, joining the Sisters of Notre Dame in Passo Fundo at the age of 21. She was professed in 1974 and retained her Baptismal name becoming Sister Maria Salete.

Sister Maria Salete graduated in Biological Sciences and, for several years, was a Biology and Religious Education teacher at various ND schools. For a time, she also ministered as the province´s vocation director as well as a member of the vocation team in different dioceses.

In her autobiography written in 1971, Sister Maria Salete expressed herself as follows: “In the future, I intend to be a nurse and dedicate myself to the sick, suffer with those who suffer, cheer up the sad and lift up the unsuccessful, bearing witness to Christ. When I have accomplished this, I can say that I am happy”!

Sister Maria. Salete’s desire came true after she had specialized in nutrition and dietetics. As a nutritionist and nursing technician, she dedicated herself to the health care area, especially giving nutritional guidance to the patients in the province´s health care institutions and in the permanent residences for the elderly.

Sister was a joyful, easy-going person, which made her beloved by everyone. She served as local superior for several terms, always attentive to the smooth functioning of the community and to promoting the fraternal, religious, and professional life of the sisters.

On the night of October 31, Sister Maria Salete did not feel well. After taking some medication, she traveled to Passo Fundo as an ex-officio member for the Provincial Chapter. The sisters there realized that Sister’s health condition needed urgent attention. A medical evaluation indicated that she had suffered a heart attack.  Sister Maria Salete was immediately admitted to São Vicente de Paulo Hospital in Passo Fundo. On December 14, she was transferred to the ICU due to an acute pulmonary edema and returned her life to God the following night, December 15, at 10:30 pm, due to multiple organ failure.

We pray that God rewards Sister Maria Salete for all the good she accomplished in life. May she be our intercessor for more vocations among young women who will dedicate their lives to the good of others, incarnating the goodness of our good and provident God.