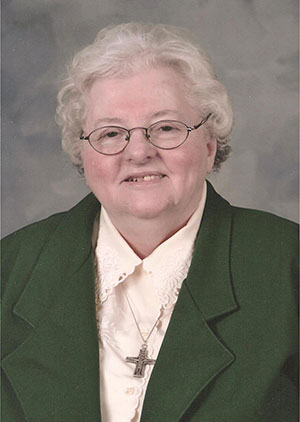 On Tuesday, March 11, after sixty-one years of dedicated service to the Church and to the community, Sister Mary Christelle gave back her soul to the God she served so well.

Mary Catherine grew up in Toledo as the third of six children in the family of Frances Marie Curtiss and Henry Roesner. It was in this setting that Sister grew in her love for nature and learned the skills of gardening — an activity that became a source of joy for her throughout her life. She attended Gesu School where she was taught by the Sisters of Notre Dame. Mary Catherine continued her education at Notre Dame Academy from which she graduated in 1949. She entered the Community the following January, and was invested in the summer of 1950.

After her graduation from Mary Manse College, Sister Mary Christelle pursued advanced studies at the University of Notre Dame in South Bend, Indiana, graduating with a Master of Science Degree in Chemistry with a solid background in physics and math. She could be very demanding of her students while at the same time instilling in them confidence in their ability to fulfill their potential. Sister Mary Christelle’s early assignments were in the elementary schools soon followed by 29 years in high schools teaching Math and Science.

Sister harbored a deep sense of the Divine Indwelling. Her favorite scripture passage —words from the gospel of John — fed Sister’s soul: “I in Him and He in me!” She would never be alone on her journey through life. Affirming words of acceptance from older co-sisters also brought her great joy.

In 1995 she left the classroom and began tutoring high school students in physics and in math. Women Blessing Women, a program that served the needs of poor women, welcomed Sister as a volunteer tutor helping women obtain their GED.

In 2012 God asked of Sister Mary Christelle that she herself become poor in a way that challenged her fierce sense of independence. Her need for more skilled health care made it necessary that she take up residence at the Ursuline Center. Sister took hold of this new experience and soon discovered ways that allowed it to become life-giving for her.

God called Sister Mary Christelle to himself
where she now enjoys the riches of the mystery of his Divine Indwelling.