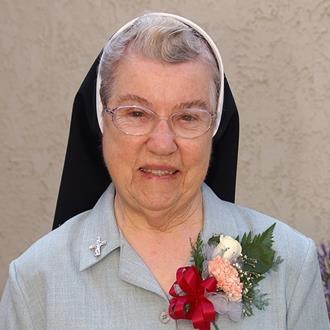 Sister Mary Francelia was the second child of Frank and Christina Kriebel Klingshirn and baptized Margaret Ann. Following her mother’s sudden death in 1925, Margaret and her siblings were raised by their maternal grandmother. Margaret’s grandmother was a “good disciplinarian and a spiritual lady” who believed that no young woman “would leave her home without knowing the arts of housekeeping, sewing, cooking and a bit of gardening.” When her father remarried in 1931, the family moved to Sheffield, Ohio and a step-sister and three step-brothers and eventually three half-brothers joined the family.

Margaret came to know the Sisters of Notre Dame first at St. Mary’s School in Avon and later at St. Teresa’s School in Sheffield. After completing three years in the local public high school, she enrolled at Notre Dame Academy on Ansel Road as a postulant on September 8, 1935. Margaret was invested as Sister Mary Francelia the following year.

Since she was eight years old, Sister Mary Francelia had wanted to become a “Sister teacher.” From 1938 to 1962, Sister ministered first as a teacher and then as principal in Catholic elementary schools in Cleveland and Elyria, Ohio, and at the Campus School of the Catholic University in Washington,D.C. In 1962, she was transferred to California where she ministered for two years (1962-1964) as principal and 8th grade teacher at St. Matthias Elementary School in Huntington Park. Afterwards, Sister spent six years as principal and superior at Our Lady of the Assumption School in Ventura and then one year teaching grade eight at Our Lady of Perpetual Help in Downey.

Before coming to California, besides teaching, Sister Mary Francelia had been responsible for supervising practice teachers both in Ohio and at the Campus School. In September 1972, Sister was appointed Elementary Supervisor for the Notre Dame schools in California. Three years later, in December 1974, Sister Mary Francelia succeeded Mother Mary William Gara as Provincial Superior of the Rosa Mystica Province.

Sister Mary Francelia’s term as provincial introduced her to Notre Dame world-wide through opportunities to visit not only Germany and Rome but also the Netherlands and Brazil and, as she wrote “broadened and enriched [her] in ways she never perceived.” Perhaps her most note-worthy achievement of her tenure was the construction of Notre Dame Center in Thousand Oaks.

After completing her term as provincial superior, she returned to her first love – teaching. In 1981, she was asked to open the Sacred Heart Parish School in Ventura. Beginning with a kindergarten and grades one and two, Sister systematically added a new teacher and a new grade each year as well as overseeing the necessary construction such implementation required.

In 1998, Sister Mary Francelia accepted a position with A. F. International School of Languages for Foreign Students in Westlake. Her work as an ESL teacher not only introduced Sister to a variety of languages and cultures but brought her into contact with many types of professional people who wished to be licensed or attend universities in the United States.

Sister Mary Francelia remained actively involved in education even after she moved to Notre Dame Center in 2002 both at the A.F. Language School and by helping our sister-guests from Korea with English. At the same time, Sister shared in the community’s hour of adoration and was responsible for the lovely flower arrangements throughout the house.

We are grateful for the wonderful example of Sister Mary Francelia as a master educator for all who knew her.